Mexican scientists continue to find ways to improve the humble tortilla, one of the essential components of Mexican cuisine and a major source of calcium for many Mexicans. We described two years ago how researchers at the Autonomous Metropolitan University of Mexico (UAM) had reduced pollution from the making of corn tortillas. This month, a press release from Cinvestav (Centro de Investigación y de Estudios Avanzados del Instituto Politécnico Nacional) reveals that researchers have developed a way to reduce the amount of lime required in the making of tortillas, while enhancing their dietary value. This will further reduce the pollution and ecological footprint associated with tortilla making:

Researchers have developed “environmentally friendly tortillas” that are more nutritious, help prevent osteoporosis, slow the aging process and help fight obesity. A team led by Juan de Dios Figueroa Cárdenas, of Cinvestav’s unit in Queretaro, developed an environmentally-friendly method to turn gourmet corn into tortillas that have a high nutritional content and double the shelf life, without increasing the price of the final product.

The current process used to make tortillas is “highly polluting” and “not very efficient,” resulting in tortillas that “in many cases do not contain the fiber or calcium” people need. Given the importance of tortillas in the Mexican diet since pre-Columbian times, researchers worked on developing a process that “does not produce pollutants” and replaces lime, a corrosive substance, with salts and other ingredients in the cooking process. The use of other salts retains the outer layers of corn kernels during cooking and preserves a large amount of nutrients that end up being lost in the existing process and generating an enormous amount of pollution and wasted water.

The tortillas are also useful in fighting obesity (a huge problem in Mexico) because they contain double the fiber of a traditional tortilla, Figueroa Cárdenas said, adding that the tortillas’ high calcium content will help prevent osteoporosis.

[This post is based on the text of the press release] 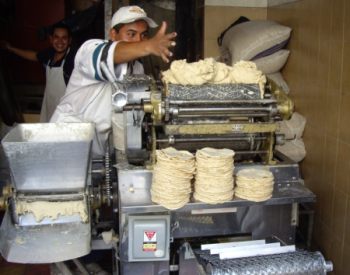