The first detailed scientific account of Lake Chapala was written by Henri Guillaume Galeotti. It was based on a visit to Chapala in February-March 1837, and published in French in 1839.

Galeotti (1814-1858) was born in Paris and  studied natural history at the Establissement Géographique de Brussels, founded in 1830 by Philippe Vandermaelen, a very famous Flemish cartographer. Vandermaelen produced an extraordinary world atlas, published in 1827, with 400 maps in six volumes, covering the entire world at a uniform scale of about 1:1,600,000.

Galeotti arrived in Mexico in December 1835; it turned out to be a visit which lasted several years. Galeotti was primarily a botanist, and was responsible for the first scientific descriptions of scores of plants, including a wide variety of cacti, for which he had a particularly fondness.
In his account of Lake Chapala, Galeotti starts with a detailed description, before providing some personal observations of storms:

“We have observed in the lake the phenomenon of occasional waves (seiches) which are in the habit of lasting plenty of time, with one part of the water remaining calm next to the rough part. This usually occurs at about five in the afternoon. We noted several of these singular effects, on February 27 and 28, and in March of 1837: the weather was calm and the temperature between 18 and 22 degrees Centigrade. The phenomenon is visible on the southern shore and in Tlachichilco and Chapala. The flood water rises from one to four feet (from 33 centimeters to 1.33 meters)…”

“From time to time, very strong whirlwinds or cloudbursts agitate the lake, snatching fish from their hideouts, and hurling them onto the nearby mountains. Some have been found on quite a high mountain near Ixtlahuacan, two leagues from the lake.”

Galeotti goes on to provide a rich account of the varied flora and fauna, especially the birdlife, around the lake, including:

“(the) water sheep or pelicans (Pelecanus) which live on the island of Chapala, and fly in flocks of 50 or 60 individuals, at about five in the afternoon, to search for food on the shores, where some little fish called javai are abundant. The pelicans are very fierce and plump, and have white feathers with a yellowish green tint at the tips of their wings.”

“There is a great diversity of fish in the waters of the lake. The whitefish and the bagoc are very well-liked for the table. A great quantity of fish is caught in Easter week. The inhabitants of the vicinity subsist on little else apart from the product of this fishing, for which they prepare by building reed shacks on the shores of the lagoon, and lighting large bonfires between 6 and 7 in the evening to attract the fish.”

All in all, his article is a remarkable achievement for its time, and a true testimony to the powerful pull that Lake Chapala has had on so many foreign visitors.

Source: Galeotti, H. G. 1839 Coup d’oeil sur la Laguna de Chapala au Mexique, avec notes géognostiques. Translations by the author; all rights reserved.
Note:  This is an edited version of an article originally published on MexConnect, and based on chapter 21–“The natural history of Lake Chapala”–of  Tony Burton’s Lake Chapala Through the Ages, an anthology of travellers’ tales (Sombrero Books, 2008) – click here for the original article.

In the 19th century, most of the proposed schemes to change the course or nature of the Lake Chapala area were never carried out. Of those that were implemented, the most significant was the construction in 1883 of the Presa Corona. This dam facilitated the construction of a hydro-power plant at the Juanacatlán Falls. Associated irrigation channels allowed much of the Santiago valley to be farmed all year. 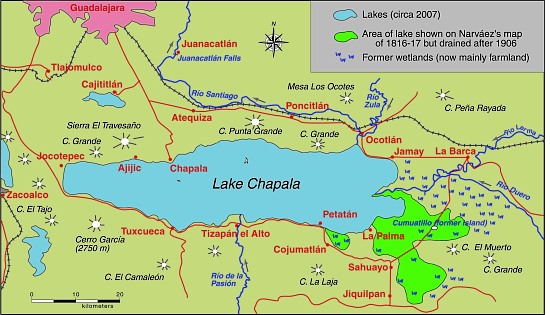 At the eastern end of the lake, farmers had tried several times to gain permanent additional land by draining parts of the lakeshore. Calls for more land, and more control over the position of the edge of the lake were renewed following a drought in 1896, and the very low lake level the following year, when the hydro plant had to be taken out of service for lack of water. Engineers decided to build a dam at Poncitlán to regulate the River Santiago and conserve water in times of plenty.

A few years later, in 1904, very high floods following the rainy season made landowners even more unhappy. The inauguration of the Poncitlán dam in 1905 ironically meant that water levels remained high each year for longer than usual in the much-coveted eastern marshes. In several places, including Jamay and La Palma, local landowners constructed dykes to prevent the water from covering their fields. Levées were built along the Lerma and its tributary the Duero.

Manuel Cuesta Gallardo, a native of Guadalajara, had a much bolder vision, which reflected how successfully Europeans had increased their areas of farmland through drainage and reclamation schemes. He convinced President Porfirio Díaz to award him a concession for the 50,000 hectares of land that would be gained by constructing an 80-kilometer-long earth bank from La Palma to Maltaraña, to completely amputate the eastern end of the lake, the area known as the Ciénega of Chapala. The scheme, designed by engineer Luis P. Ballesteros, also involved digging major drainage channels. All the work was done by hand. By 1908, the work was complete.

The following year, disastrous floods overwhelmed the earth banks, destroyed bridges and wrecked crops. Further floods in 1913 caused further damage, but all the dykes were rebuilt by the following year. While the scheme has certainly not prevented occasional flooding, it has increased the agricultural area in the region. But at what cost? Critics say that the delicate ecological balance of the lake was destroyed for ever. The marshland’s natural sponge-like ameliorating effect, soaking up excess rainfall to make it available again in times of drought, was gone for good.

The hydrology of Lake Chapala is discussed in chapters 6 and 7 of Geo-Mexico: the geography and dynamics of modern Mexico. A case study of ‘residential tourism’ in the villages on the northern shore of Lake Chapala is discussed in chapter19. Lake Chapala was recently declared an Internationally Important Wetland by the Ramsar Convention, joining a large global network of similarly important wetland sites. The 13th International Living Lakes Conference is being held in Chapala, March 22-25, 2010.

This is an edited excerpt from Tony Burton’s Lake Chapala Through the Ages, an anthology of travelers’ tales (Sombrero Books 2008)