Thirty-one homes have been demolished due to structural damage resulting from subsidence in the colonia Benito Juárez. The subsidence, on 28 October 2010, occurred close to the Neza II garbage tip and affected more than 200 homes in total.

Temporary accommodation has been found for the families affected, who will have their rents of up to 2,000 pesos a month paid for the first six months. The compensation to be paid to the affected families from government coffers is still being decided.

Geologists and engineers from the Universidad Nacional Autónoma de Mexico (UNAM) y el Instituto Politécnico Nacional (IPN), are currently assessing the risks of alternative sites for rebuilding the 31 homes. Several areas of Nezahualcóyotl are known to be vulnerable to subsidence or to the sudden appearance of surface cracks (superficial faults).

The subsidence is presumed to have occurred because of the filtration of liquids from the Neza II tip through the subsoil, though precise details are still being investigated. To prevent further problems in the area, pipes are being installed to channel all liquid residues away from homes, and vents are being placed to allow the escape of gases emanating from within the garbage tip.

The three settlements of Nezahualcóyotl, Chimalhuacán and Los Reyes La Paz add about 1,000 tons of garbage daily to the Neza II tip. Authorities are now planning to close the tip completely by the end of November 2010.

Elsewhere in Nezahualcóyotl, the structural integrity of a shopping center and sports complex located near the Neza I tip are also being investigated.

The fact that subsidence occurs far more frequently in the eastern part of Mexico City (including Nezahualcóyotl) than elsewhere does not indicate that the solutions must be local. Ramón Aguirre, the director of Mexico City’s Water System (Sistema de Aguas de la Ciudad de México), has repeatedly emphasized the importance of looking at Mexico City’s potable water and drainage problems in the context of the entire metropolitan area (which extends well beyond the boundary of the Federal District). Aguirre fears that climate change and further over-exploitation of the aquifers, which Mexico City shares with the State of México, will only lead to more problems of water supply and more cases of subsidence.

Chapter 23 of Geo-Mexico: the geography and dynamics of modern Mexico looks at urban issues, problems and trends. To preview more parts of the book, click here and use amazon.com’s “Look Inside” feature.

Judging from the recent coverage in the US and world media, most people would immediately respond “Yes!”, citing the current BP spill resulting from the April 20 explosion of the Deepwater Horizon offshore rig. 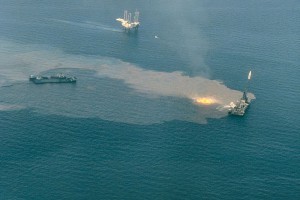 However, at present this would not be the correct answer.  The largest oil spill in the Gulf of Mexico followed the June 3, 1979 blowout from the PEMEX Ixtoc I exploratory well in the southern part of the Gulf of Mexico 100 kilometers from the Campeche Coast. Though the well was in only 160 feet of water, the leak was very difficult to plug.  The flow started at an estimated 30,000 barrels a day (b/d); but was reduced in July by pumping mud into the well.  In August PEMEX pushed steel, iron and lead balls into the well to further reduce the flow.  Though PEMEX drilled two relief wells to reduce the pressure, the leak continued for 295 days until March 23, 1980.  An estimated total of 140 million gallons oil escaped making the Ixtoc I the largest oceanic accidental oil spill in history.

The next largest accidental oceanic spill was that same year when in July, 1979 the two tankers, the Atlantic Empress and the Aegean Capitan, collided off Trinidad and spilled about 90 million gallons.  The largest oil spill ever was during the Gulf War Gulf when the Iraqi Army intentionally sabotaged the oil fields in 1991 spilling about 525 million gallons.  The second largest was the Lakeview Gusher which occurred on land near Bakersfield, California in 1909 and spilled an estimated 370 million gallons. 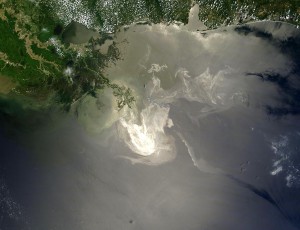 The current BP leak south of Louisiana spilled an estimated 19 to 39 million gallons during its first six weeks.  At this rate, it could surpass the Ixtoc I spill between by September or October.  Everyone hopes that the leak is stopped long before then…

Update (16 July 2010). BP has capped the well, and no more oil is leaking into the ocean. The total volume of oil that has already spilled from the BP well is estimated at between 90 and 180 million gallons, comparable to, and possibly even exceeding, the Ixtoc I spill.

Update (16 August 2010). ﻿A team of US scientists now estimates that BP’s Macondo oil well, which exploded on 20  April 2010 spewed 170 million gallons of crude into the Gulf of Mexico during the 87 days before 15 July, when it was  finally capped. A further 34 million gallons of oil were captured by BP during efforts to cap the well. This makes the BP disaster the world’s largest accidental offshore oil spill ever.