The state of Quintana Roo (see map below) has an area of 42,360 square kilometers and a population of 1,361,821 (2010 estimate). The state is one of Mexico’s flattest states, with its highest point being only 230 meters above sea level. Its distinctive landscapes include coastal barrier islands (such as the one Cancún’s hotel  zone is built on), magnificent coral reefs and tropical karst (limestone scenery). It also has tropical forests and mangrove swamps. The state’s capital city  is Chetumal (estimated 2010 population: 146,000), an important port and the gateway for overland connections to Guatemala. A short distance north of Chetumal is the beautiful, tranquil Laguna Bacalar. 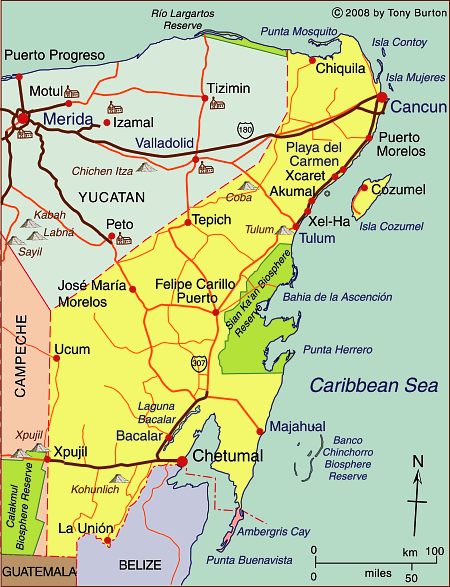 Until the mid-20th century, the state was best known for its chicle (used for chewing gum) collectors and its Mayan ruins. Many of these have been restored in the past 50 years or so, and are now important tourist attractions. The best known sites are Tulum perched on a cliff overlooking the azure Caribbean sea (and unfortunately all too accessible for cruise ship passengers) and Cobá, a magnificent city only partially cleared of jungle. Ecotourism is an important sector of tourism in Quintana Roo. Critics notwithstanding, one of the most memorable eco-related sites in the entire country is Xcaret marine park. The biosphere reserve of Sian Ka’an in the middle part of the state also draws large numbers of  ecotourists.

The purpose-built resort of Cancún, begun in 1970, has grown into Mexico’s most important tourist resort. Easily reached by plane from most parts of the USA, Canada and Europe, it is one of the world’s major destinations for package holidays. The area south of Cancún is often referred to as the Mayan Riviera; it is one of Mexico’s most rapidly developing tourist areas.

Geo-Mexico: the geography and dynamics of modern Mexico looks at many aspects of Quintana Roo, including its socio-economic make-up and its development indicators. If you are interested in the geography of Mexico, please recommend this book to your local library or consider buying your own copy, as well as following this site with details of all new posts via  e-mail, Facebook or Twitter.

This table shows the ten states in Mexico which have the largest populations. The total population was 112,322,757 in 2010, according to the preliminary results of the 2010 census. These figures may change slightly when the final results of the census are made available.

Q. Find these ten states on a map of Mexico [printable map of Mexico in pdf format]. Do the states with the most people also have the largest land areas?

La Curva de la Gringa is the name of a 90-degree bend near Jungapeo, west of Zitácuaro in the state of Michoacán. Literally translated as “the American woman’s curve”, how did this name come about? The first thing to remember is that all names on maps have to come from somewhere. Detailed maps of Mexico, including the 1:50,000 series, relied initially on aerial (later satellite) imagery, followed by some checking on the ground. Given the expense, ground checking was often relatively limited. However, the on-the-ground surveyors were responsible for adding names to the maps. 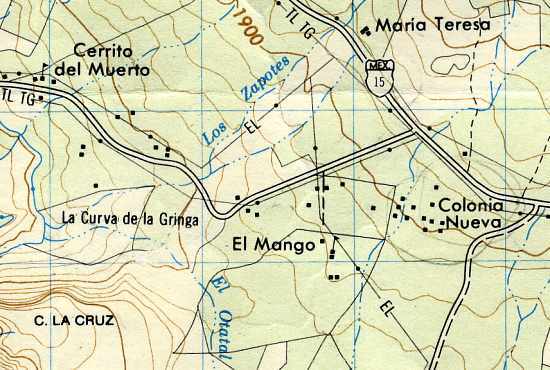 In this case, local informants were apparently unanimous in calling this bend La Curva de la Gringa. Further research shows that this had nothing to do with any purported similarity to the sensuous curve of a gringa‘s breast, but derived from when the road was first paved in the 1950s. Apparently, shortly after the road was finished, an American lady driving her oversized gas-guzzler down to the luxury spa of San José Purua completely missed this bend, and plowed into a cornfield. The locals have long memories!

In 2010, this road is being widened, and sidewalks and street lights installed, all the way from Federal Highway 15 (see map), past La Curva de la Gringa, and as far as the money allocated (currently about 7 million pesos) allows. The first section was due to be inaugurated 21 March 2010. If anyone has an update, please leave a comment. Here’s hoping that no more accidents ever occur along this stretch of road, and that no future place names ever reflect such unfortunate incidents. 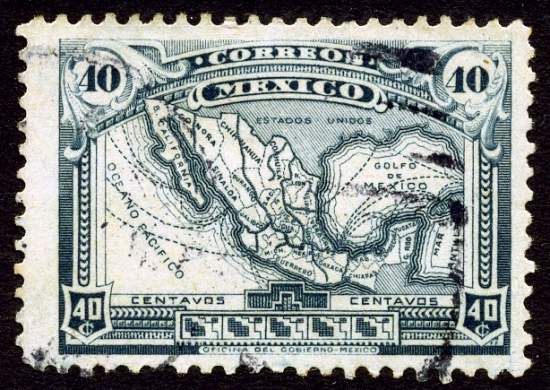