It is becoming harder and harder to keep up with the ever-changing landscape of drug cartel territories. As the government crack-down leads to more and more high-profile arrests, some cartels are struggling to reorganize and lose ground (literally) as rival groups step in to take control. This has resulted in drug-related violence in the past year spreading to new areas, accounting for the serious incidents reported in cities such as Guadalajara and Acapulco and in several parts of the state of Veracruz, even as violence diminishes in some areas where it was previously common. (The patterns of drug-related violence are analyzed in depth in several other posts tagged “drugs” on this site).

The major cartels are: 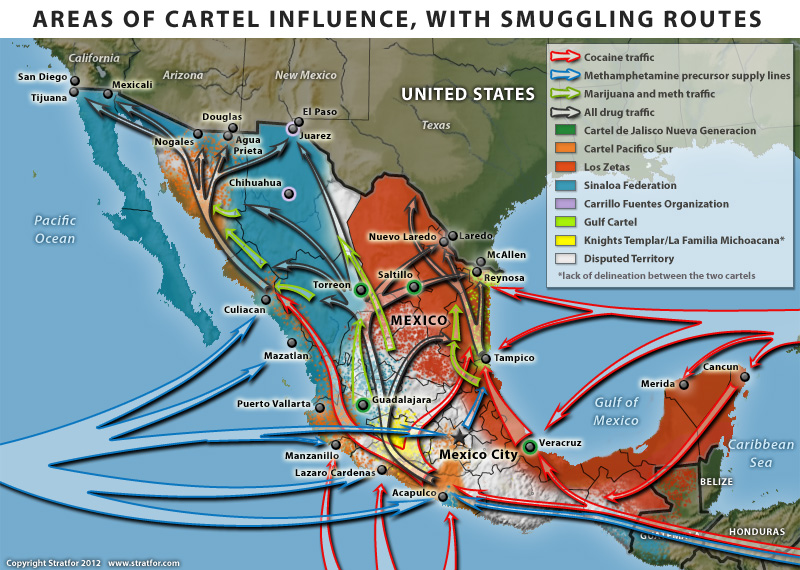 One possible strategy (for the government) would be to stamp out all smaller groups until a single major group controled almost all the trade in drugs. At this point, so the argument goes, incidental violence against third parties would drop dramatically. Such a simplistic approach, however, fails to tackle the economic, political and social roots of narco-trafficking.

Meanwhile, there are some signs that Los Caballeros Templarios, the breakaway faction of LFM, based in the western state of Michoacán, wants to transform itself into a social movement. This is presumably why it has distributed booklets in the region claiming it is fighting a war against poverty, tyranny and injustice.