Greenpeace activists chose the Juanacatlán Falls (“The Niagara of Mexico”) for their latest protest to call attention to the poor quality of Mexico’s rivers and lakes. They cited government statistics that show 70% of Mexico’s surface water is contaminated. Most of the pollution comes from industrial dumping, rather than municipal sewage.

It is hard to imagine a better choice. The activists, clad in protective clothing and wearing masks to avoid inhaling toxic gases, paddled kayaks into the River Santiago immediately below the malodorous falls and unfurled banners with slogans such as “Mexican rivers, toxic rivers” (see image). 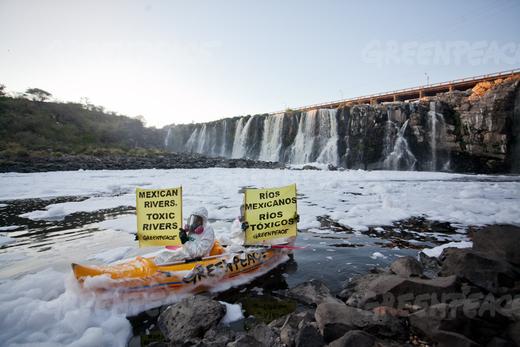 The activists called on the government to commit to a policy of zero dumping of toxic substances into rivers and lakes by 2020, with sanctions for actions leading to pollution and its effects.

In a coordinated action, thirty NGOs in Jalisco announced the creation of the “Broad Front in Defense of Water and Against Privatization ”, demanding actions towards a fully sustainable use of water. They asked government to take the lead in cleaning up the Santiago River and provide urgent medical attention for residents of communities affected by its high level of pollution (see this blog post). They also called for an end to the privatization of water services.