The headline — “Mexicans work longer hours than anyone else” — said it all, or did it? A recent report from the OECD (Organisation for Economic Co-operation and Development) found that Mexicans worked longer hours than people in any other OECD country, devoting 10 hours a day to paid and unpaid work (the latter includes housework and cooking). By contrast, Belgians work the least, only 7 hours. The OECD average is 8 hours a day. Is the positive spin simply because the OECD is currently headed by Mexican economist Dr. Angel Gurría?

The figures come from the latest edition of OECD’s Society at a Glance (2011), which gives an overview of social trends and policy developments in all member countries. Using indicators taken from OECD databases and other sources, it shows how societies are changing over time and how different countries compare.

Most unpaid work is housework. Mexicans do the most, more than 3 hours per day, and Koreans the least, only 79 minutes. Mexicans spend more time cooking than is customary in most other countries. The inhabitants of the USA spend the least time cooking each day, barely 30 minutes, and Turks the most, 74 minutes. Most people spend around 50 minutes a day cooking. Shopping also makes up a big part of unpaid work. The OECD average is 23 minutes a day, with the French spending the most (32 minutes) and the Koreans the least (13 minutes). 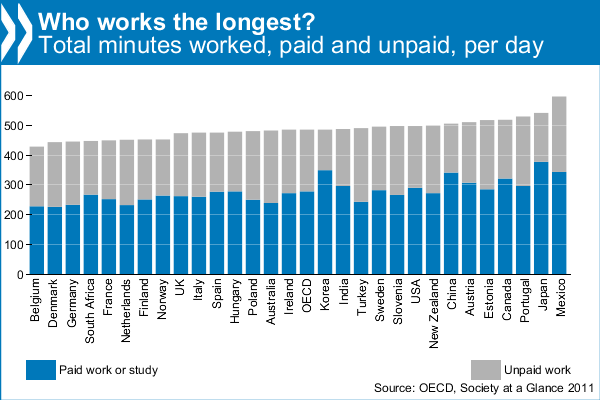 The report also attempts to estimate how much unpaid work is worth as a percentage of GDP for the 25 OECD countries for which data are available. It finds that the value of unpaid work is considerable, equivalent to about one-third of GDP in OECD countries, ranging from a low of 19% in Korea to a high of 53% in Portugal.

From a Mexican perspective, this may all paint a very rosy picture. However, as other commentators (see, for example, Burro Hall) have pointed out, it could equally well mean that Mexicans have the lowest productivity in the world, since they are working longer hours than other countries, but failing, in most sectors, to out-perform them!

Other highlights from the OECD’s Society at a Glance: