Bananas are the world’s fourth most important dietary staple after rice, wheat and corn (maize). They are a major source of nutrition (low in fat, but rich in potassium and vitamins A, B, C and G) for people living in tropical areas. Of the 80 million tons of bananas produced globally each year, less than 20% enters international trade; the remainder is eaten locally. Bananas that are ripe and eaten raw are called desert bananas; those that are cooked are called plantains.

How did bananas reach Mexico?

The banana plant is thought to have originated in southern Asia, possibly in the Mekong Delta area. Though the details are sketchy, banana plants were carried from there to Indonesia, Borneo, Philippines and Pacific Islands, including Hawaii. By AD650, bananas had reached Egypt and the Mediterranean coast. In the fiteenth century, Portuguese navigators and slave traders carried bananas to the Canary Islands. By the early sixteenth century, bananas had been introduced by Spanish missionaries to Santo Domingo on the island of Hispaniola in the “New World”.

Bananas reached Mexico for the first time in 1554 when Bishop Vasco de Quiroga (the first Bishop of Michoacán), returning from Europe, brought some plants back with him from his short layover in Santo Domingo.

FAO statistics for the past few years show that Mexico has about 75,000 ha planted with bananas. Total production is close to 2.2 million metric tons a year, giving an average yield of about 30 metric tons/ha. The yield is trending slowly upwards. The yield under irrigation (38.3 tons/ha) is 55% higher than that from rainfed farms. As a result, while irrigated farms account for just under 40% of the total acreage of bananas, they supply 50% of total production. Commercial banana growing provides about 100,000 direct jobs in Mexico and 150,000 indirect jobs. 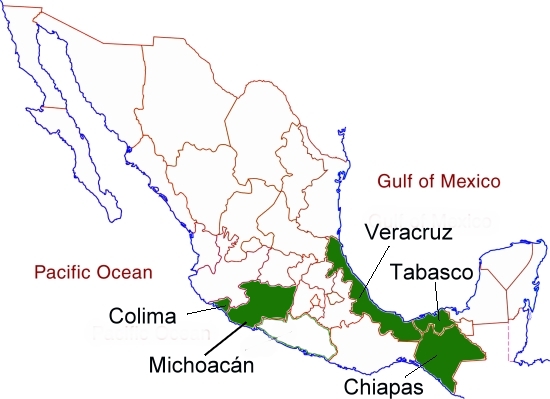 The main banana producing states (see map) in Mexico are:

The world’s major importers are the USA (bananas are the single most widely eaten fruit in that country), Germany, Japan, Russia, UK, Italy, France, Sweden and China.

Bananas were first introduced into US diets (from Cuba) in the early 19th century. The earliest large-scale shipments of bananas to the USA were from Jamaica in the 1870s, and were organized by Lorenzo Dow Baker, who later founded the Boston Fruit Company, which later became the United Fruit Company, now Chiquita Brands International.

Banana exports from Mexico have risen rapidly in recent years and reached 307,000 metric tons in 2012 (compared to 60,000 tons in 2005), worth about 140 million dollars. The USA is the world’s largest importer of bananas and Mexico’s main foreign market, receiving 80% of all exports of Mexican bananas.

Source for history of bananas:

Other posts related to agricultural products:

One Response to “The geography of banana production in Mexico”