The U.K. has declared 2015 as the “Year of Mexico” and is hosting numerous cultural and trade events this year related to Mexico. Not to be outdone, a Mexican-themed Pavilion exhibit has won gold at the prestigious Chelsea Flower Show, held in London in May. The show is organized each year by the Royal Horticulture Society and was first held more than a century ago.

The gold-medal winning garden design in 2015 was based on a very unusual garden created in Mexico by the eccentric Englishman Edward James at “Las Pozas” (the Pools), the home he built near Xilitla in the state of San Luis Potosí. James (1907-1984) was a sponsor of the surrealist art movement, as well as a surrealist artist in his own right. His entire estate in Mexico became his canvass for a marvelously-creative collection of sculptures and follies set in luxuriant, semi-tropical jungle.

The winning garden at Chelsea, entitled “Surreal Pillars of Mexico,” was designed by Jon Wheatley and sponsored by HSBC and the U.K.’s National Dahlia Collection. The dahlia is Mexico’s national flower: 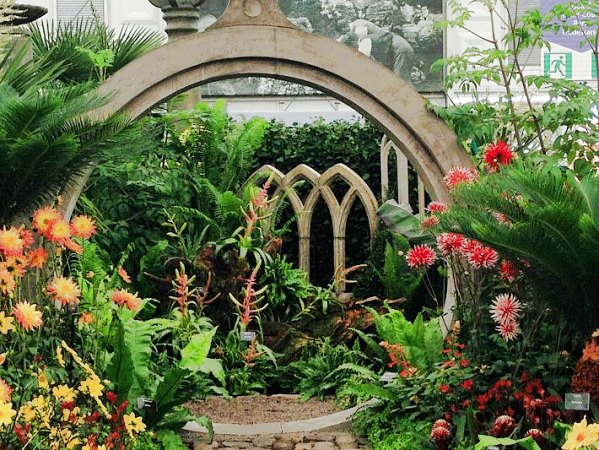 “Surreal Pillars of Mexico” had a circular structure and pillars that emulated Edward James’s garden in Mexico. It included 50 different types of dahlias, surrounded by over 100 plants and vegetables such as lettuce, cactus and the exotic agave plant.

New varieties of dahlias, first described in Mexico in 1529, had been developed via selective breeding and propagation programs even in pre-Columbian botanical gardens. The dahlia arrived in the U.K. in the early nineteenth century, via Spain and only after several unsuccessful attempts at introducing it. The National Dahlia Collection in the U.K. cultivates and promotes the flower; all the varieties existing in the U.K. originated from just three types of dahlias.

The Year of Mexico to the United Kingdom includes more than 100 separate exhibitions, concerts, festivals, academic workshops and artistic residencies; as well as trade missions, research projects, grants and scholarships. These shows will highlight the creativity of Mexican writers and artists, while also showcasing the country’s history and its modern-day industrial strength.Events are being held at a number of cities, including London, Cardiff, Edinburgh, Belfast, Manchester, Oxford, Liverpool and Birmingham.