It shows the economic losses (line graph) and loss of lives (bar graph) resulting from hydro-meteorological events between 1980 and 2013. Some major storm events are named on the graph. The two background colors divide the period into before and after the introduction, in 2000, of Mexico’s early warning system (Sistema de Alerta Temprana ante Ciclones Tropicales, Siat-CT). 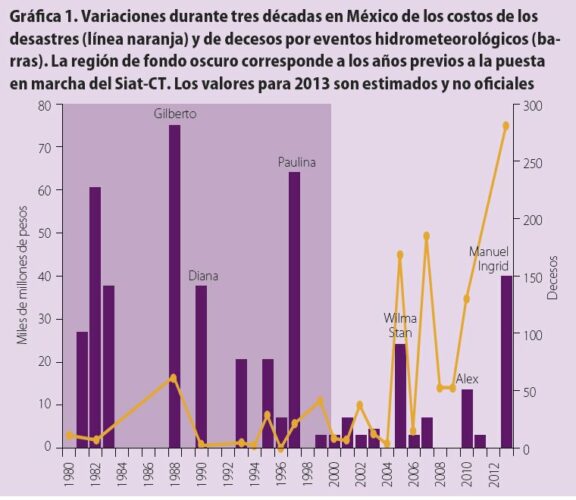 Overall, the trends are for some reduction over time in loss of life, but a rapid escalation since 2004 in the economic costs associated with storms and other extreme weather events. This echoes the changes seen in impacts around the world for most hazard types in recent decades.

Given that lives are still being lost, however, the researchers suggest that it is time to re-evaluate Mexico’s early warning system for tropical cyclones. Storms such as Wilma and Stan in 2005, Alex in 2010 or Manuel and Ingrid in 2013, they say, show that the system has not been entirely successful in its principal objective of avoiding loss of life.

The increase in economic costs of hazard events is sometimes attributed to insurance payments but in Mexico’s case, and taking the example of Hurricanes Ingrid and Manuel, only about 20% of total losses were covered by insurance, according to the Mexican Insurers Association (Asociación Mexicana de Instituciones de Seguros). Mexico’s federal Finance Secretariat now assumes that hazard impacts will amount to 1% of GDP a year, a figure that reduces the nation’s economic growth rate by about 0.1% a year.

The authors argue that, in addition to an improved early warning system, other changes are needed in order to reduce vulnerability. Specifically, the system should be modified to:

In addition, they suggest that the reliance on the early warning system on the Saffir-Simpson scale, first developed in the 1970s, as a measure of likely damage, should be reconsidered, given that some recent storms (e.g. Stan in 2005, and Manuel in 2013) have led to far greater damage than would have been expected from their position on that scale. The researchers point out that the current model does not do well in predicting local variations in impacts.

As a result, they propose that identifying categories of risk is at least as important as categories of storm intensity. For example, they suggest that the risks associated with both the intensity and accumulation of precipitation should be taken into account, combined with soil conditions and the water levels of streams and reservoirs. Studies of the spatial distribution of impacts after storms could help identify risk factors and suggest ways to improve future warnings.

Even with an efficient early warning system, other actions are still needed. Buildings could be subject to more stringent construction regulations, especially in those coastal areas that are most at risk, while better programs of beach restoration, environmental planning and hazard event response are also needed.

There is no such thing as a perfect prediction and early warning system, but hopefully Mexico will lead the way in Latin America in reducing human fatalities from hazard events.