For a fascinating overview of caves and caving in Mexico, see John Pint’s great article and image gallery (link below) on MexConnect. Pint is an accomplished caver and author who has explored caves on several continents. His writing is clear and authoritative, much of it based on his own first-hand experiences and investigations.

Caves have played an important part in Mexico’s history. The Maya on Mexico’s Yucatán Peninsula, which is largely limestone, and now known to be riddled by amazing interconnected sinkholes and subterranean tunnels, viewed caves as entrances to an underworld. They revered some caves in particular, adorning them with lavish offerings. 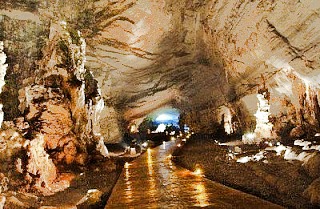 The sinkholes of the Yucatán Peninsula are beautiful, but are not all that deep. In the state of Tamaulipas, El Zacatón is a sinkhole that is considered the deepest water-filled sinkhole in the world.

In the early days of tourism in Mexico, the Cacahuamilpa Caverns near Taxco (Guerrero) were a popular place to visit. The English traveler Mrs. Alec Tweedie recalls in Mexico as I saw it how she was deep underground in these caves when a telegram arrived bearing the sad news that Queen Victoria had passed away. (If only postal and telegraph services were that efficient today!)

In recent years, scientists have begun to unravel the mysteries of how strange forms of life can thrive deep underground, even in environments that are noxious to humans. The sulfur-loving organisms of the Cueva de la Villa Luz in the state of Tabasco are a much-studied example.

Pint also discusses lava caves, of which Mexico has some fine examples. One of the most visited lava caves in the world must be that which plays home to the La Gruta restaurant, close to the famous archaeological site of Teotihuacan.

And, finally, for one of the most spectacular caves imaginable, how about the Naica crystal caves?

Visit John Pint’s website for a selection of his writing, with many original articles, illustrated with great photographs, about individual caves in Mexico.

Sadly, we did not have room in Geo-Mexico: the geography and dynamics of modern Mexico to delve beneath the surface into the wonders of Mexico’s caves.  Mexico’s landforms are discussed in chapter 3, which may be expanded in future editions, depending on the feedback from readers like you. If you have not yet read a copy, please ask your local library for a copy, or better yet, please consider purchaing your own copy via this website or amazon.com

Feedback from readers about any aspect of Geo-Mexico: the geography and dynamics of modern Mexico is welcomed.