Male-female ratios are a useful way of looking at population dynamics. They may reflect, or may influence, many aspects of social and economic geography from employment opportunities to rates and age of civil partnerships (including marriage). 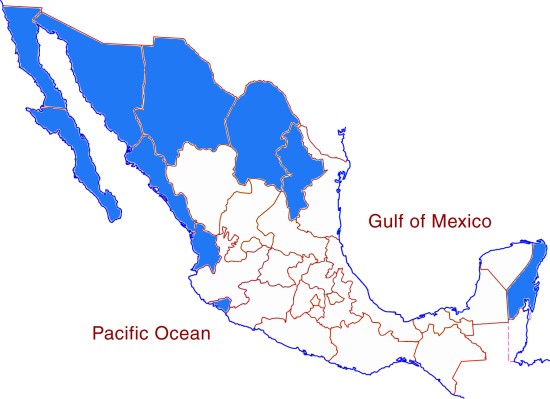 The ten states with the highest male-female ratios (2010)

What do these states, at opposite extremes of the country, have in common?

They are among the most economically dynamic states. All except Sonora have a vibrant tourism sector, where employment opportunities in the construction sector (mainly for young males) have offered young people an alternative to migrating north of the border.

Sonora has a more mixed economy,which includes an important mining sector (another predominantly male source of employment), as well as agriculture, manufacturing and some tourism.

In a future post, and to avoid any accusation of gender bias, we will look at the states which have the highest proportion of females (i.e. the lowest male-female ratios, the lowest number of males/100 females).

Several chapters of Geo-Mexico: the geography and dynamics of modern Mexico discuss population issues, including population growth, distribution, gender differences and density. Buy your copy today to have a handy reference guide to all major aspects of Mexico’s geography!