Men are often thought to have superior spatial abilities to women. However, recent research has suggested that such differences are task dependent. It is now commonly argued that differences in spatial abilities may date back to early human societies during the Pleistocene. At that time, men’s spatial skills became fine-tuned for successful hunting of animals that were constantly on the move, while women’s spatial skill-set developed to ensure success in gathering immobile plant resources.

In a nutshell, men are thought to find their way about using orientation, and women by memorizing landmarks. One study reported that men performed better than women in finding their way through unfamiliar woodland, whereas another study showed how women exploring a farmers market in Santa Barbara, California, could remember where individual food items were more accurately than men.

Despite these earlier studies, the male/female differences in spatial skills had never been tested in appropriate circumstances in the field prior to the research carried out by four enterprising Mexican researchers led by Luis Pacheco-Cabos of the National University (UNAM).

The team studied the foraging techniques and success rate of men and women from a small village in Tlaxcala as they searched for edible mushrooms on the slopes of La Malinche volcano (Malintzin).

The small rural community of San Isidro Buensuceso has about 8,000 Nᨵatl-speaking inhabitants. The villagers have a long history of collecting mushrooms. Most mushroom collecting takes place during the summer rainy season. The vegetation in collecting areas is relatively open pine-oak forest, though the precise mix of species varies with altitude. 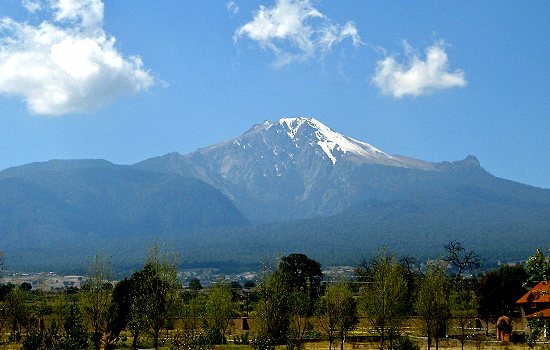 Each small group of mushroom collectors was followed by a researcher who recorded their movements and the weight of mushrooms collected. The exercise was carried out at seven different sites, most more than 3000m above sea level, through relatively open forest in terrain that included steep gullies carved into the flanks of volcano. The researchers were continuously monitored to record data enabling the calculation of the energy they expended in kilo-calories (kcal). Collectors gathered up to 9.5 kg of mushrooms in a single trip.

What were the teams key findings?

Although men and women collected similar quantities of mushrooms, men did so at significantly higher cost. They traveled further, to greater altitudes, and had higher mean heart rates and energy expenditure (kcal). They also collected fewer species and visited fewer collection sites.

What does this mean?

The results suggest that differences in spatial ability between men and women are task-dependent. In terms of search strategies developed for gathering wild mushrooms, and presumably other wild plants, women outperform men. The women proved to be more efficient foragers than men in energy efficiency terms since they collected significantly more mushrooms while expending significantly less energy in doing so.

The researchers conclude that similar studies are now needed for other cultural groups, and for the gathering of different resources, such as firewood.