This is the first in an occasional series of updates featuring news items relating to the Mexican diaspora, especially that part of it residing in the USA.

1. Mexico is the leading point-of-origin for foreign-born residents of the USA diagnosed with tuberculosis

The number of TB cases reported in foreign-born persons in the USA was between 7,000 and 8,000 between 1993 and 2008, but fell slightly in 2009. In 2009, 6,854 cases (59% of the total TB diagnoses in the USA) were reported for foreign-born residents. The leading country of origin for these foreign-born TB cases was Mexico, followed by the Philippines, Vietnam, India amd China (see image). 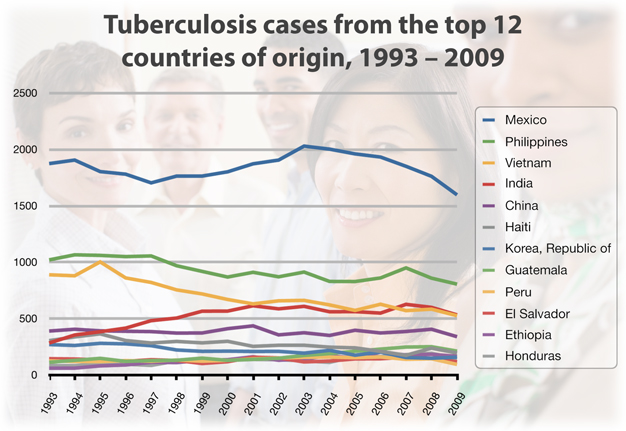 TB cases in the USA by country of origin; click to enlarge

A second graph shows that the TB rate (per 100,000 population) has fallen 77% since 1993 for USA-born persons, a much faster decrease than the 45% decrease over the same time period for foreign-born residents. The US Center for Disease Control (CDC) is reported to be working to improve the screening of immigrants and refugees, especially along the USA-Mexico border.

2. Mexican migrants to the USA experience higher rates of depression and anxiety disorders

In 2007, there were about 12 million Mexican-born people in the USA. Mexicans accounted for 30% of the foreign-born population in the USA, and 25% of the US Hispanic population. A study published in the March 2011 issue of the Archives of General Psychiatry suggests that young adult Mexican migrants in the USA are much more likely to suffer depression and anxiety disorders than family members who remained in Mexico. The disorders experienced included depression, dysthymia, social phobia, panic disorder, post-traumatic stress disorder, and generalized anxiety disorder. The risk was highest for those in the 18-25 age bracket. The researchers conclude that this study offers the first direct evidence that “experiences as a migrant might lead to the onset of clinically significant mental health problems in this population”.

3. Hispanic purchasing power in the USA exceeds $1 trillion a year

According to the US Census Bureau, 2010 data show that Hispanics accounted for more than half of the total population increase in the USA over the past 10 years, a trend which is expected to continue. More than 50 million people in the USA are of Hispanic descent, 1 in 6 of the population. The buying power of Hispanics has increased sharply, from less than 4% of the domestic market in 1980 to more than 9% (more than a trillion dollars) in 2010. People of Mexican descent have an estimated buying power of $616 billion a year, easily the single most important segment of the total Hispanic market.

Remittances sent home by Mexican migrants working in the USA increased in 2010 by 5.5% to $5 billion. The figure comes from Mexico’s central bank.

5. How much do unauthorized immigrants in the USA pay in taxes?