In several previous posts we have looked at specific migration channels connecting Mexico to the USA:

A Mexican government website, for its Institute for Mexicans Abroad, has lots of statistics about the number of Mexicans registered at each of Mexico’s consulates (which number more than 40) in the USA, together with their state of origin. A series of handy interactive maps for 2008, 2009 and 2010 provide a quick overview of some of the major flows.

Hovering your mouse over any state in Mexico brings up details of which consulates in the USA attracted the highest number of registrations for migrants who originated from that state. 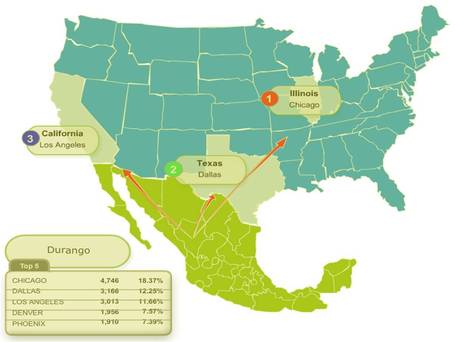 In the case of Quintana Roo, the top three consulates for registrations are San Francisco (California), Atlanta (Georgia) and Dallas (Texas); these three account for almost 40% of all registrations of migrants from Quintana Roo.

Identifying a pattern, or variations between the patterns for several states is one thing; explaining it is another!

Q. What factors might influence the differences in patterns noted for the three states of the Yucatán Peninsula?