Huatulco is best known as one of Mexico’s leading tourist resorts, one of several similar large-scale, purpose-built developments partially funded by federal funds.

In 1967, responding to bullish predictions of US demand for beach vacations, Mexico’s central bank identified the five best places for completely new, purpose-built tourist resorts. Top of the list, as part of a 30-year plan, was the uninhabited barrier island now known as Cancún (see The growth of Cancún, Mexico leading tourist resort). The other choice locations were Ixtapa, Los Cabos, Loreto and Huatulco. The National Fund for Tourism Infrastructure (renamed the National Tourism Development Fund, Fonatur, in 1974) began building Cancún in 1970 and Ixtapa in 1971.

Huatulco’s site on the coast of Oaxaca had been initially identified in 1969 but the area lacked adequate transportation infrastructure until the regional highways were improved in 1982. Legal land expropriations followed; by 1984 Fonatur controlled more than 21,000 hectares (50,000 acres). In 1985 Fonatur began construction of an airport and a service town, La Crucecita, a few kilometers back from the coast. In 1986 the villagers of the coastal community of Santa Cruz were resettled in La Crucecita. Most of Huatulco’s nine bays were linked by paved road by 1987 (see map). 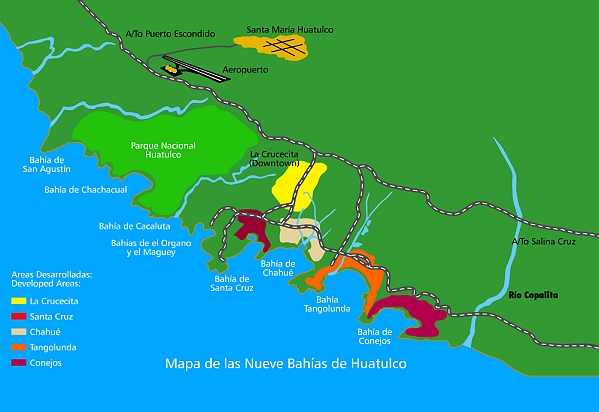 Sketch map of Huatulco (not to scale)

Fonatur took a number of steps to help the original residents adapt to the massive changes taking place around them. It built schools, held public meetings, provided medical and police services, and offered job training programs. Most people gradually adapted; some are employed in Huatulco hotels and some started their own small businesses. By 1994 Huatulco had 1905 hotel rooms and attracted 170,000 tourists, 26% of them foreign. The average length of stay was 4.22 days.

Huatulco’s growth has not been as rapid as Cancún’s. By 2006, Huatulco had 2506 rooms and played host to 312,000 tourists (15% foreign). While Cancún first attracted Mexican tourists and then foreign tourists followed (and now dominate), in Huatulco the proportion of foreign tourists has fallen as the resort has developed. The master plan for Huatulco foresees 30,000 hotel rooms and a city with an eventual population of 600,000.

As for most of its other developments, Fonatur’s construction of La Crucecita established a clear spatial and visual divide between the tourist areas on the coast and the residential areas for tourism employees, in this case on the inland side of some low hills.

So far, so good, but critics of centrally-planned, “top-down” resorts like those built by Fonatur, and of Huatulco in particular, point to the tremendous strains placed on the local inhabitants and on the local environment. We look at some of these in more detail in Villages near Huatulco, Oaxaca: a case study in the “Integrated Administration of Natural Resources”