Assuming that the world did not come to an end yesterday, Geo-Mexico would like to convey best wishes to everyone for the entire duration of the next Long Count Maya calendar cycle, which runs until sometime in 2406. This may allow sufficient time for some real progress to be made in environmental stewardship.

Today’s post looks at two ornithological conservation projects that have made significant advances in 2012. The first is in Maya territory in south-east Mexico, where biologists are trying to stave off the extinction of the colorful Scarlet Macaw, and extend its current range. Researchers believe that between 250 and 400 of the birds now remain in the wild, almost all of them in the area straddling the borders between Mexico, Guatemala and Belize.

Birds raised in the Xcaret Center for the breeding of macaws, located in the state of Quintana Roo, are being gradually prepared for being set free in Aluxes Park, an ecological reserve on the edge of the natural forest in Palenque, in the state of Chiapas. The plan is to release as many as 250 birds over the next five years. The natural range of the Scarlet Macaw, prior to deforestation, habitat loss and wildlife trafficking, once extended all the way along Mexico’s Gulf coast, from Tamaulipas to Campeche.

At the other end of the country, a decade-old multi-institutional project (government, academic and NGO) aims to reintroduce the California Condor into Baja California state. There are believed to be about 30 California Condors now flying free in the Sierra de San Pedro Martir, following the release of six condors there earlier this year. 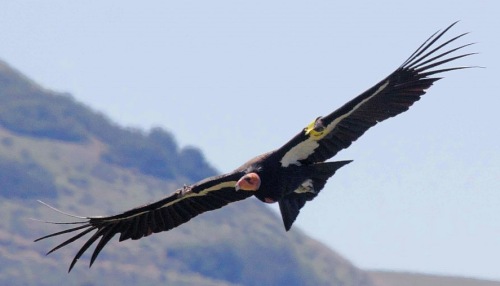 Specialists say the project has almost reached the point at which the birds are likely to reproduce successfully in the wild. Since 2008, 10 nesting sites have been located. Condors nest in caves making it difficult and time-consuming to locate nests, even when the birds are tagged with transmitting devices. Among the threats to the success of the program is the incidence of lead poisoning in condors resulting from them swallowing bullets left in animal carcasses killed, and then abandoned, by hunters.