The largest salt-making facility on the planet is near Guerrero Negro on the west coast of Mexico’s Baja California Peninsula. It produces about 9 million metric tons of salt each year. The salt here is not mined, but extracted from ocean water by evaporation. The salt fields cover 33,000 hectares (acres), including 28,000 ha of collection ponds and 3,000 ha of crystallization ponds. 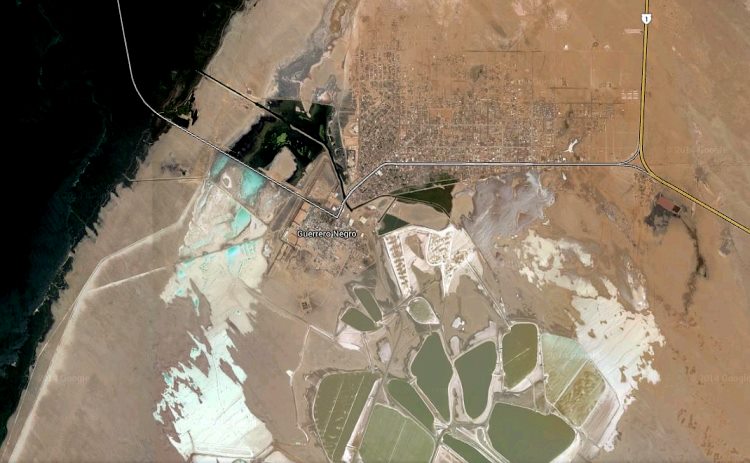 The major locational advantages are:

Disadvantage? Since the salt working got underway around the saline Ojo de Liebre coastal lagoon, the entire area has been designated part of the El Vizcaino Biosphere Reserve on account of its importance as a habitat for endangered species and breeding ground for gray whales. The salt lagoons are also located on major flight paths for migratory birds.

Prior to the 1950s, salt extraction in this area was small-scale and methods were rudimentary. In the 1950s, San Francisco ceased supplying salt to the US west coast paper industry and an alternative source of salt was needed. Daniel Ludwig (who would later build the famed Acapulco Princess Hotel) set up a company at the saline Ojo de Liebre coastal lagoon near Guerrero Negro in 1954; three years later, salt was exported to the USA for the first time. Ludwig sold the company in 1973. Exportadora de Sal (Salt Exporter) is now jointly owned by the Mexican government (51%) and the Japanese Mitsubishi corporation (49%).

Plans to expand the company by building another evaporation plant for salt further south along the Baja California Sur coast were thwarted by officials after a lengthy and acrimonious campaign by environmentalists angered at the probably environmental consequences. (For discussion of some of the issues, see “Mitsubishi and Laguna San Ignacio“, “Mexico’s Friendly Whales” and “The Laguna San Ignacio Conservation Alliance conservation plan“).

This short, 3-minute Postandfly video shows what the landscape and salt working operations look like from the air:

The salt-making process is fairly simple. Seawater is pumped into a series of collection ponds. About 700 million tons of seawater enters the system each year. As the water in the ponds evaporates, the salt concentration increases. The collection ponds are controlled by dikes and gates. At a critical level of salt concentration, the water is pumped into the next point, and so on. 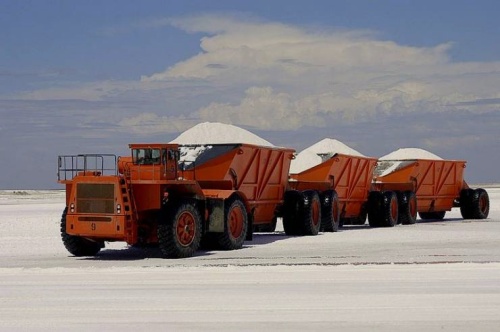 Eventually, more than a year later, the water becomes saturated with salt, and the mineral salt (almost entirely sodium chloride) begins to crystallize out. The pond is then drained and the salt collected. The harvesting of the salt is done by giant graders which scrape off only the uppermost layer, leaving a hard saltpan below as the future floor of the pond. Giant gondola trucks collect the mounds of salt and carry it to a cleaning plant. The salt is then washed with a salt water solution to purify it still further, before being shipped.

Initial shipping is from the Chaparrito Port (where the washing plant is located) near Guerrero Negro. This port can load barges carrying up to 10,500 metric tons, which take the salt to the much larger port of Morro Redondo, on the southern tip of Cedros Island, a short distance to the west and just inside the state of Baja California. The Morro Redondo facility has additional inspection, storage and packing facilities and handles ocean-going vessels. 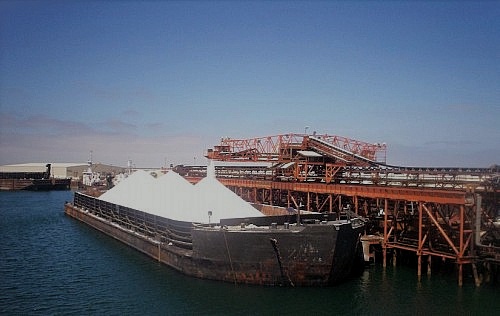 In 2014, Mexico exported slightly over 9 million tons of salt, worth 164 million dollars, making it the world’s fifth largest salt exporter, after the Netherlands, Canada, Germany and Chile.

Each year, Exportadora de Sal produces about 9 million metric tons of salt of various grades, and is reported to be expanding its operations to boost annual production to 9.5 million tons by 2020.

It sold 8.98 million tons of salt in 2014, 87.4% of the national total. 60% of the output of industrial salt (for use in pulp and paper, and chemical industries) is exported to Japan. The company also exports salt to many other countries including USA, Canada, Korea, Taiwan and New Zealand. Almost all the 100,000 metric tons of table salt produced each year is sold on the domestic Mexican market or elsewhere in Latin America.

Note: This is an updated version of a post first published here in February 2012.