The El Triunfo Biosphere Reserve covers 119,177 hectares in the southern state of Chiapas, in the municipalities of Acacoyagua, Angel Albino Corzo, La Concordia, Mapastepec, Villa Corzo, Pijijiapan and Siltepec. The reserve ranges in elevation from 450 meters above sea level to 2550 meters (8370 ft).

El Triunfo is part of the mountain range known as Sierra Madre de Chiapas in the southern part of the state. It straddles the continental drainage divide. Short rivers on one side flow to the Pacific Ocean. The rivers on the other side of the divide are the start of one branch of the mighty Grijalva-Usumacinta River (Mexico’s largest river in terms of discharge) which flows into the Gulf of Mexico. 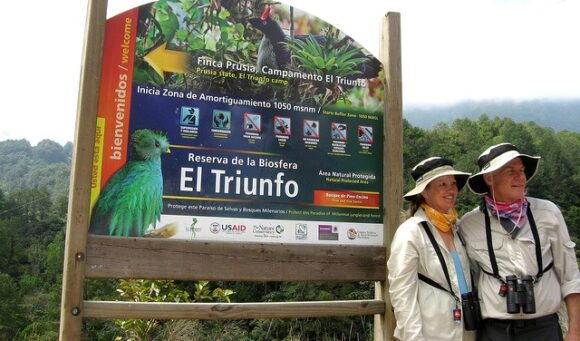 The El Triunfo reserve was first established in 1990. In 1993, it was officially designated a World Biosphere Reserve by the MAB-UNESCO program. 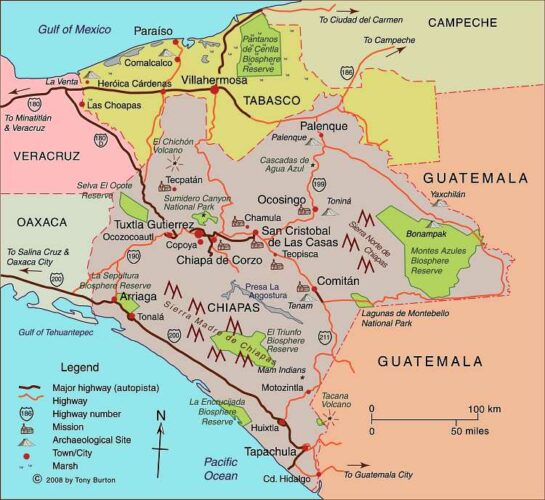 Map of Chiapas. Click here for interactive map of Chiapas on Mexconnect.com; all rights reserved

Threatened mammalian species found in the reserve include Geoffroy’s spider monkey, margay, the tapir (Tapirus bairdii), jaguar (Panthera onca) and puma. Unfortunately, this means that this is a favored area for wildlife hunters, poachers and traffickers.

The bird fauna is especially distinctive. The reserve is one of the relatively few places in Mexico where ornithologists have the chance to find the horned guan (Oreophasis derbianus), resplendent quetzal (Pharomachrus mocinno), cabanis’ tanager (Tangara cabanisi), azure-ramped tanager and great curassau. The resplendent quetzal is considered one of the most beautiful birds in the Americas, and its feathers were highly prized in pre-Columbian times.

This BBC video is an outstanding visual introduction to the Reserve:

As is the case for other Biosphere Reserves, local people are allowed to live and work in the El Triunfo Reserve. The core area (25,719 hectares) is restricted to conservation and research only, but the buffer/transition areas (93,458 ha) are home to about 12,000 people. El Triunfo is also on the migration route of Guatemalan Indians entering Chiapas either to work (seasonally) on coffee plantations or as the first stage of their journey further north. This floating population is trickier to quantify.

The area was important historically for the production and trade of items such as cacao, quetzal feathers, jade and copal resin. In the 17th century, the population grew rapidly in this region with the establishment of plantations, and later cattle ranches. Coffee was introduced at the end of the 19th century and quickly became the dominant cash crop for most small landowners. Environmental damage, mainly from clearance and cattle ranching, became a major problem, but it was not until the 1970s and pioneering work of Dr. Miguel Alvarez del Toro that any restrictions were placed on land use.

Today, the main economic activities within the buffer areas of the reserve are agriculture (coffee, corn), the collection of Chamaedorea palms, trade, construction and cattle raising.

Several NGOs are working with farmers in the buffer zone to improve their livelihoods and ensure that farming can be carried out sustainably and still support the existing population. For a lively introduction to this topic, try (Co-operative) Value Added on the blog Small Farmers. Big Change. As they say, “a green and more just food system starts with small farmers”.