Here are brief descriptions of some of the most commonly heard forms of regional music within Mexico. What you hear depends on where you travel!

For many decades, mariachi has been widely considered to be the quintessential Mexican folk-music genre, and has become an important symbol of Mexican music and culture.

A mariachi band is a term used to describe an ensemble band of five or more musicians that wear the traditional costume of a charro or Mexican cowboy. The costume consists of a waist-length jacket, tightly fitted pants and boots and a large sombrero. The jacket, pants and sombrero are elaborately decorated with colorful metal ornaments and intricate embroidered designs.

The unique sound of mariachi music is created by combining trumpets, violins, and guitars with two traditional Mexican instruments, the vihuela and the guitarrón. The music is characterized by loud, hard driving rhythms, spirited melodies and humorous lyrics. Shouts and cries (gritos) are periodically given while a song is being sung, giving the music an additional lively character. 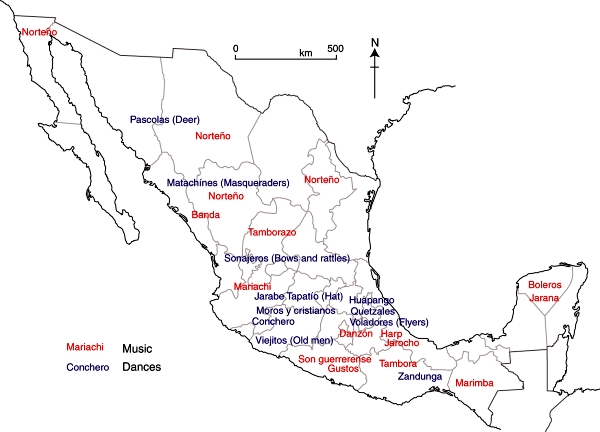 Music and dance in Mexico. Fig 13.3 of Geo-Mexico, the geography and dynamics of modern Mexico. All rights reserved.

Another very popular Mexican music form is the ranchera (ranch song), which originated during the time of the Mexican Revolution. It is basically cowboy music, and the singers dress in the traditional style of the Mexican horseman with tight breeches, jacket, boots, gun holsters and a large sombrero.

The lyrics of ranchera songs typically deal with rural life, unrequited love, or about the struggles of ordinary people living in the country. The songs are sometimes joyous and sometimes nostalgic or tragic, and are often sung in a very dramatic and passionate manner, with the singer crying out “Ay, ay, ay, ay, ay!” at various points.

Another popular music genre, particularly in northern Mexico, is the norteña. This form of music has its origins in the ballads that were traditionally sung by people living along the USA-Mexico border. This music style is typically a hybrid of many other musical forms, including the waltz, polka, and country music.

Norteña is high energy music, driven by the accordion and the booming bass sound of the bajo sexto, a large 12-string guitar. The lyrics of norteña songs typically deal with stories of life along the border, illegal immigrants, outlaws and desperados, drug dealers (narcotraficantes), corrupt public officials, rejected lovers, etc.

Many norteña bands are quite large, with a full horn section and strings. The genre’s most famous group, Los Tigres del Norte has cultivated a large number of fans both in Mexico and in the USA.

Banda (Band) refers to the form of music played by large brass ensembles that first appeared in the northern Mexican state of Sinaloa several decades ago. A typical banda ensemble features trumpets, trombones, tubas and percussion instruments, and may include keyboards. String instruments are used sparingly, if at all. Banda sounds somewhat similar to American Big Band music, but with a distinctive Hispanic twist.