In an earlier post, we looked briefly at Females, males and gender inequality in Mexico.

Gender inequality is unfortunately still alive and well in Mexico. It is often shown through discrimination and human rights violations.

Several women’s empowerment groups aim to change the status quo. Perhaps the most successful to date has been an organization known as Semillas (= seeds). Founded in 1990, Semillas is the shorthand for the NGO Sociedad Mexicana Pro Derechos de la Mujer, A.C. (Mexican Society Pro-Women’s Rights).

In the words of its homepage, Semillas…

“knows that all the different responsibilities and duties that women have as mothers, caretakers, providers, educators, resource generators, politicians, field workers, business owners, social leaders, scholars, artists, etc… make them the fundamental factors of change in their families, communities, and society at large. Semillas is also aware that strengthening Mexican women’s rights builds a more just society, promotes a new culture of equality between women and men, and improves life conditions for generations to come.” 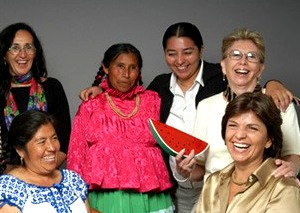 Semillas aims to break the traditional gender inequalities in Mexico through sponsorship of dozens of local initiatives, covering a wide range of development objectives. Since 1990, Semillas have started 237 sustainable development projects, benefiting 650,000 women. Projects are based on the principle of “women helping women”. Semillas funds and supports projects run by women who are already exhibiting leadership qualities in their communities.

For example, one project supports the work of a victim of psychological violence who has spent the last 15 years of her life designing programs to ensure equality of educational opportunity in her home community. This educational equality is not limited to formal schooling, but extends to the sports activities available after-school and at weekends. When our daughter was growing up in Mexico, we learned first-hand in the early 1990s that many smaller, traditional villages in Mexico tend to offer a reasonable variety of sports, such as soccer, only for boys. Rarely is anything equivalent on offer for girls. While the situation is gradually improving (girls’ soccer is becoming one popular option!), there is still a long way to go in many places.

Semillas does not only fund projects concerned with educational equality; other projects focus on health care, female working conditions and legal aid.

The Semillas website has many short articles, images and videos highlighting its work, if you are interested in finding out more about this noteworthy NGO. (It also has a link for donations).

Stop Press! By coincidence, today the Inter Press Service news agency published Four Years On, No Justice for Atenco Women (by Daniela Pastrana). In 2002, Atenco was proposed as the site for a new Mexico City airport, leading to protests by local residents. Eventually, (in April 2008) 11 women brought a case before the Inter-American Commission on Human Rights, involving allegations of torture, sexual violence and illegal deprivation of freedom, all connected to the protest movement. Their case was supported by many NGOs, as well as several winners of the Nobel Peace Prize. Mexico’s Supreme Court ruled earlier this year that the opposition to the new airport was a “legitimate social protest” and ordered the immediate release of those protesters who were still behind bars.

Chapter 29 of Geo-Mexico: the geography and dynamics of modern Mexico is titled “Variations in Quality of Life within Mexico” and discusses many aspects of poverty, including  Gender Inequality. Buy your copy today, or ask your local library to purchase a copy for their collection.