The ecological footprint of a country  is defined as the area of land (and water) required by a population, given prevailing technology, to produce the resources it consumes and to absorb any wastes created.

Ecological footprints are measured in ‘global hectares’ (gha). A global hectare encompasses the average annual productivity of all biologically productive land and ocean areas in the world. In 2005 the world’s population required the resources of 2.7 gha /person.  Unfortunately, the world’s biocapacity—the amount of resources its ecosystems can supply each year—was only equivalent to 2.1 gha per person and is declining each year as population increases (see graph).

The deficit between biocapacity and our ecological footprint causes damaging environmental changes to forests, fisheries, rivers, coral reefs, soil, water and air, and plays a major role in global climate change. The figures mean that our current usage of the world’s resources is inherently unsustainable. 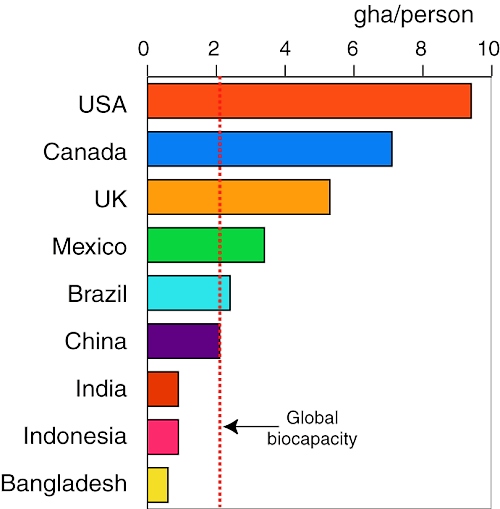 Click here for a printable bookmark of this graph (pdf file)

The graph shows the ecological footprint of several countries. China’s footprint matches global biocapacity while the footprints of India, Indonesia and Bangladesh are fully sustainable. On the other hand, the USA’s footprint of 9.4 gha is surpassed only by the United Arab Emirates. Australia and Canada both have footprints over 7 gha. In simple terms, their populations require more than three times their fair share of the world’s biocapacity.

Chapter 30 of Geo-Mexico: the geography and dynamics of modern Mexico, from which this extract is taken, looks in much more detail at the implications of ecological footprints and at alternative ways of assessing ‘sustainability’.