Mexico is one of the world’s “Top Ten” countries for vehicle production and for vehicle exports. 75% of Mexico’s annual production of around 2 million vehicles are made for export. The industry attracts large amounts of Foreign Direct Investment (FDI). Vehicle assembly plants provide around 60,000 jobs, with a further 80,000 employed in distributorships nationwide and a whopping 420,000 employed in the autoparts sector. The combined exports of vehicles and autoparts bring 85 billion dollars a year into the Mexican economy. 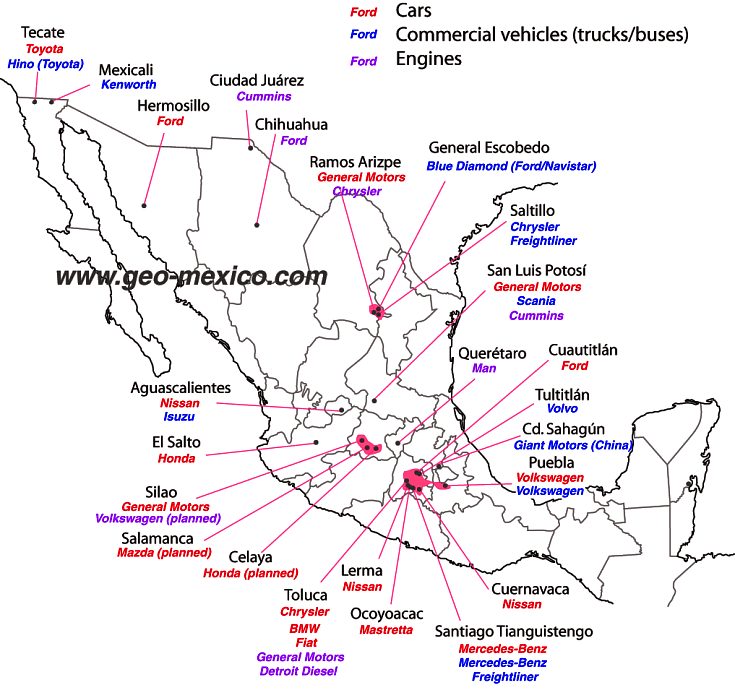 ﻿As the map shows, certain areas of Mexico have attracted more investment in vehicle assembly plants than other areas. The two largest existing concentrations are focused on Toluca in the State of México, and on Saltillo in northern Mexico. However, the fastest growing cluster is in the central state of Guanajuato, where two major plants are currently in the planning stages.

Discuss your suggestions with your classmates and teacher. The answers to these questions should give you a useful list of the major factors that explain the distribution of vehicle assembly plants in any country, not just Mexico.

A case study of clustering in a different industry