Its distinctive landscapes include a variety of coastal features and inland karst (limestone scenery). The state’s capital city  is Campeche, a colonial city which still preserves some of its ancient city walls and has UNESCO World Heritage status.  The most important city in the state economically is Ciudad del Carmen “the pearl of the Gulf”, center of the state’s involvement in Mexico’s oil industry, and an important base for offshore drilling. 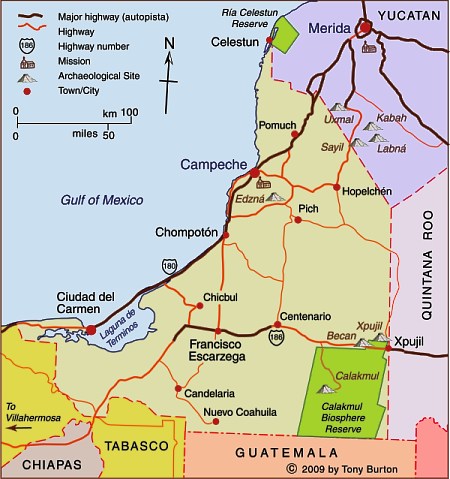 In the interior, the biosphere reserve of Calakmul has become an important tourist attraction.

The state’s economy looks set for a significant boost in coming decades as several major projects come to fruition. These include the first 6,000 hectares of a 30,000-hectare project on the coast of the Laguna de Términos for the commercial farming of rice and beans, and a similar sized forestry plantation project near Champoton specializing in the growing of scarce tropical hardwoods such as teak and mahogany.