A huge industrial development plan looks set to get underway shortly in the narrow Isthmus of Tehuantepec in southern Mexico. The low-lying Isthmus of Tehuantepec separates the Chiapas Highlands and the low Yucatán Peninsula from the rest of Mexico. The Isthmus was once considered as an alternative location to Panama for a trans-continental canal.

During Mexico’s internal Reform War (1858‑60), between the liberals, led by Benito Juárez, and the conservatives, both sides encountered serious financial problems. At one point in this war, the liberals accepted an offer from the USA to receive four million pesos in exchange for the USA having the “right of traffic” across the Isthmus of Tehuantepec “in perpetuity”. Fortunately, this treaty was never ratified by the US Senate. 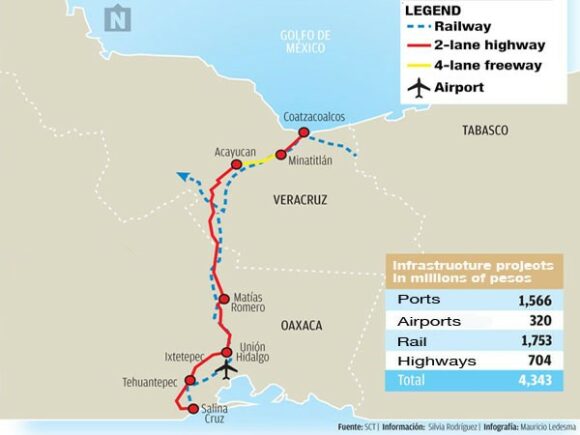 In recent years, the Tehuantepec area has received massive investments in wind power, with several major wind farms already operational and more on the drawing board. The latest plans will build on those investments to provide upgraded infrastructure meeting the preconditions for industrial development.

The 300 million dollars allocated to the first phase of the Trans-Isthmus Project will improve railroads, highways, airports, and the ports of Coatzacoalcos on the Gulf Coast and Salina Cruz on the Pacific Coast (see map).

During the second phase, private sector financing will add industrial development areas, which should boost the area’s contribution to national GDP from 2% to 4.5%, and raise the regional GDP/person to $10,000 a year, close to the national average.

The federal government has designated this region as a special economic zone, offering several fiscal incentives to new enterprises. Chinese investors have already expressed interest in building a 200-million-dollar steel manufacturing plant in the isthmus, utilizing nearby iron ore reserves to produce 3 million tons of steel a year.

Posts related to the same general area of Mexico: