Which of Mexico’s states have the fastest growing economies? The map below, based on INEGI data, shows each state’s percentage change in GDP for the three year period from 31 March 2011 to 31 March 2014. 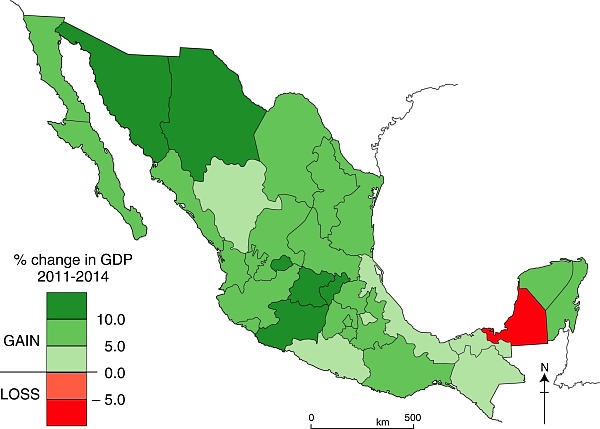 Only one state – Campeche – registered “negative growth” over the period. In Campeche, production from the oil fields that have long been a mainstay of the local economy has been gradually declining.

Besides Campeche, six states grew far slower than the average for Mexico: Durango, Veracruz, Tabasco, Chiapas and Guerrero. Not entirely coincidentally, several of these states are among the poorest in the nation, so their failure to grow as quickly as the average leaves them further behind, increasing the economic inequalities that plague Mexico’s development.

At the other end of the spectrum, the economic growth of six states – Sonora, Chihuahua, Aguascalientes, Guanajuato, Michoacán and Querétaro – easily outpaced the average for the country. Sonora, Chihuahua, Guanjuato, Querétaro, and to a lesser extent Aguascalientes, all benefited from foreign direct investments and new industries, such as those involved in  the vehicle manufacturing and aeronautical sectors.

The case of Michoacán is something of an anomaly, since that state’s economy is still heavily dependent on primary products such as avocados and iron ore. The positive growth in that state may prove to be mainly due to its negative growth in the preceding three years (2008-2011), which meant that it started the three year period shown on the map at an unusually low level. Perhaps more importantly, given the state’s recent political upheavals and gang-related violence, it is highly unlikely that Michoacán will continue to grow anywhere as quickly over the next three years.

2 Responses to “Which states are growing fastest?”