The 2015 survey of connectivity by Mexican consultancy Gabinete de Comunicación Estratégica (GCE) provides further support, if any were needed, of the north-south digital divide that we have commented on several times previously.

GCE carried out a telephone survey of 49,600 people, across the entire country, including respondents in the 76 largest cities. Respondents ranged in age from 18 to 50; 48% had a university degree and about the same percentage was categorized as “lower middle class”.

The survey question was “¿Cuenta usted con conexión a Internet?” (Do you have a connection to the Internet?)

At city level, Cancún was the most connected city. The two cities sharing the lowest levels of connectivity were Tlaxcala and Acapulco. 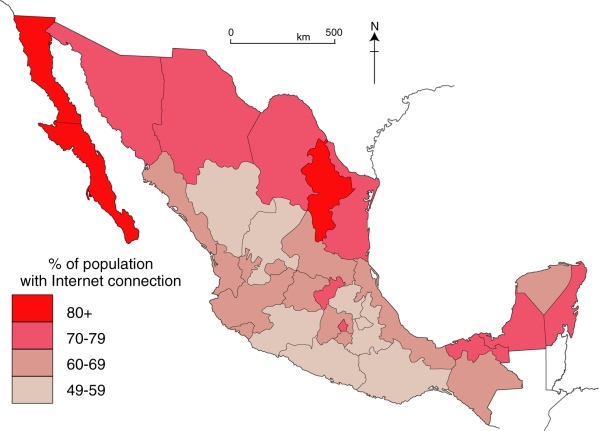 At state level (map), Baja California Sur led the way in terms of Internet users (84% of respondents claiming access to the Internet), followed by Nuevo León (81.5%) and Baja California (80.4%). (Note that the likely margin of error in results is plus or minus 4%.)

Guerrero is at the other end of the scale, with just 49% of residents online. After last-place Guerrero came Zacatecas, where 53% were connected, and Oaxaca with 55%.

Most Internet users in those three states used a desktop computer to connect. On average, most Internet users spent an hour or two a day online and social networks were the most popular destination for 20% of respondents. Facebook led the way among those networks with 74%, followed by WhatsApp with 12% and Twitter with 7%.

Another question in the survey asked which was the most trustworthy source for information: the Internet, television or newspapers. The Internet won with 28%, television came second with 25% and newspapers trailed with 24%. Frederico Berrueto Pruneta, general manager of GCE, asserts that, “What we are seeing is a very clear tendency where the Internet has won the battle over television, which had already won against newspapers”.

2 Responses to “How cyber-connected is Mexico?”