In August 2012, in The value in Mexico of unpaid work in the home, we saw that a study by the National Statistics Institute (INEGI) based on 2010 data had calculated that routine work done in the home (almost 80% of the time-value involved comes from women) was worth about 2.9 trillion pesos to the Mexican economy each year, equivalent to more than 20% of Mexico’s GDP. The INEGI calculations included the costs in time/labor needed to meet the demands of the home, and the net salary that would be paid for someone undertaking similar tasks.

INEGI has just published updated statistics on this topic.  In 2014, unpaid work by women in the home was equivalent to 18% of GDP. This figure means that female contributions in the home continue to make a greater contribution to national GDP than manufacturing (16.7%), commerce (15.5%) or education (4.1%).

The latest INEGI figures show that for every 10 hours that women work (paid or unpaid), men work only 8.3 hours. According to INEGI, the average value of unpaid work by women in the home in rural areas amounted to  51,808 pesos a year (about US$4300 at the then rate of exchange). The value for women married or living with a partner was 61,456 pesos, compared to 26,082 pesos for single women. The average in households which included children under 6 years of age was 60,628 pesos. 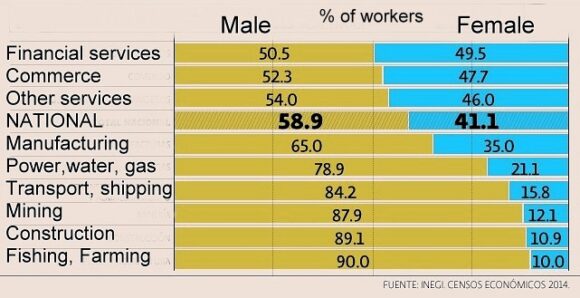 % of women in different sectors of the workforce, 2014

The figures do reveal a slight decrease in gender inequality since the employment of women is rising slightly faster than that of men, by about 2.0%/year compared to the overall figure of 1.4%/year. In 2014, about 50% of service workers, 34.5% of manufacturing workers, and 11.0% of construction workers were female.