The 4/4/2010 (Easter Sunday) earthquake centered in Baja California really did not only shake the earth but also move it. What is even more amazing is that this may be one of the best documented examples of an earthquake in one country moving parts of a neighboring country. 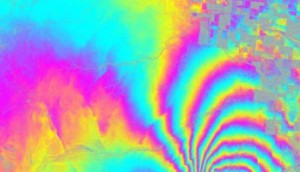 NASA has released data showing that the 4/4/2010 earthquake in Baja California moved the border city of Calexico in California. According to NASA’s analysis of radar data from research flights, the April earthquake moved the Calexico region as much as 0.8 meters (2.5 feet) towards the south.

Further south, in Baja California, some parts of the ground moved up to 3 meters (10 feet).

For a full explanation of the image, which shows an area about 20km east-west, by 15 km north-south, please refer to the original article.

Other cities have also been moved by earthquakes. For instance, in the magnitude-8.8 Chilean earthquake of 27 February 2010 , the city of Concepción in Chile was displaced a whopping 3 meters (10 feet) west of its original position.