Update [October 2012]: Despite earlier claims that the Durango-Mazatlán highway would be completed before the end of 2012, government officials have now confirmed that the highway will not be finished, and will not open, until sometime in 2013.

A truly amazing feat of engineering brilliance will force the authors of Geo-Mexico to revise one of their many original maps, when preparing the book’s next edition!

Figure 17.4 of Geo-Mexico is a map using isolines to show the average driving times by road from the city of Durango to everywhere else in Mexico. The map shows that it currently takes about five hours to drive the 312 km from Durango to the Pacific coast resort of Mazatlán, whereas driving south-east for five hours can take you as far as Encarnación de Díaz, 460 km away. The reason for this difference is that the rugged mountains of the Western Sierra Madre separate Durango from Mazatlán, whereas no significant relief obstacles lie between Durango and Encarnación de Díaz.

However, this pattern will change significantly once a new 1.2-billion-dollar highway between Durango and Mazatlán is complete. The four-lane, 230-kilometer-long highway is already well advanced; it will greatly reduce the travel time between the two cities. The major ‘missing piece’ remaining to be finished is the Puente Baluarte Bicentenario (Baluarte Bicentennial Bridge). 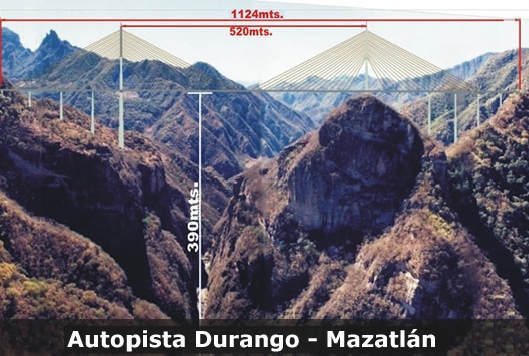 This will be the biggest cable-stayed bridge ever built in Latin America. It is 1.124 km long and 4 lanes wide. Its central span extends 520 meters. At its highest point, it is a gravity-defying 390 metres (1280 feet) above the River Baluarte from which it takes its name. The bridge’s largest supporting pillar is 153 meters high, with a base measuring 18 meters by 30 meters.

Construction, by Mexican firm TRADECO, has required 103,000 tons of cement and almost 17,000 tons of steel. The bridge joins the states of Durango and Sinaloa and removes the need for drivers to negotiate a very dangerous stretch of highway known as the Devil’s Backbone.

Meanwhile, the authors of Geo-Mexico are busy preparing a map to show the next best example in Mexico where extreme differences of terrain influence travel times between major cities! Hopefully, the government won’t immediately use the new map in the next edition of Geo-Mexico to decide where to build their next major highway!

19 Responses to “New highway in Mexico joins Durango and Mazatlán”