For the first time since 1958 Mexico was bashed virtually simultaneously by two very destructive storms: Ingrid in the east and Manuel in the west. Before discussing their destructive impact, we will describe the tracks of the two storms (photos below) and chart their chronology. 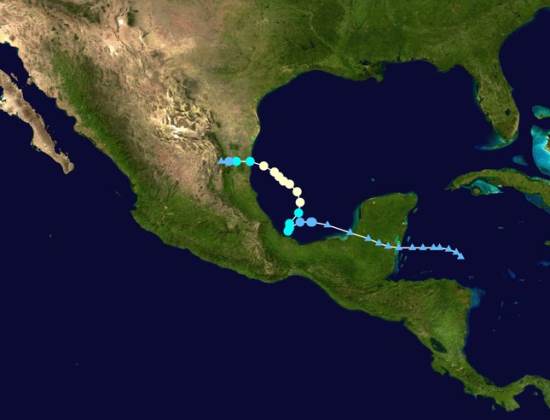 On September 10, weak weather disturbances were observed in the Caribbean east of the Yucatan Peninsula and in the Pacific south of Chiapas. The disturbance in the Caribbean gained some strength before hitting land which weakened it. It survived its crossing of the peninsula and re-emerged in warm waters of the southern Gulf of Mexico where it quickly gained strength. By the afternoon of September 12th it was upgraded to an official tropical depression. 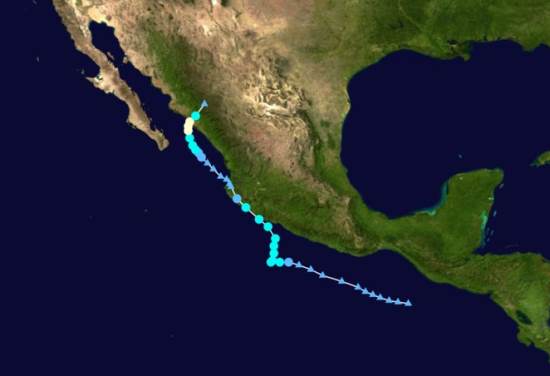 Meanwhile the disturbance in Pacific moved slowly westward and by the morning of 13th was upgraded to a tropical depression. At about noon of the 13th both storms were upgraded to become named tropical storms (Ingrid and Manuel respectively) meaning they had winds of over 40 mph. In other words, the birth of “Ingrid” and “Manuel” were almost simultaneous (light green spots on the tracking maps). After earlier moving westward, both storms started to move north and slightly east picking up moisture, strength and wind speed over the warm ocean water.

Ingrid continued to move north gaining strength and by the next afternoon, the 14th, it was upgraded to a Category I hurricane with winds of 75mph. It started to move west and winds increased to 85mph on the morning of the 15th. Meanwhile Manuel also started to move west again skirting the coast of Guerrero and Michoacán. Early on the 15th Manuel’s winds reached 70mph. Though wind speeds did not quite reach hurricane level at that time and the eye of Manuel never made landfall, it brought enormous amounts of rain to coastal communities. For example, on September 14th Chilpancingo, Guerrero’s capital, got 393mm (15.5”) of rain while Acapulco got 140mm (5.5”) (Wunderground.com). This, added to considerable rain on preceding and following days, led to horrific flooding. 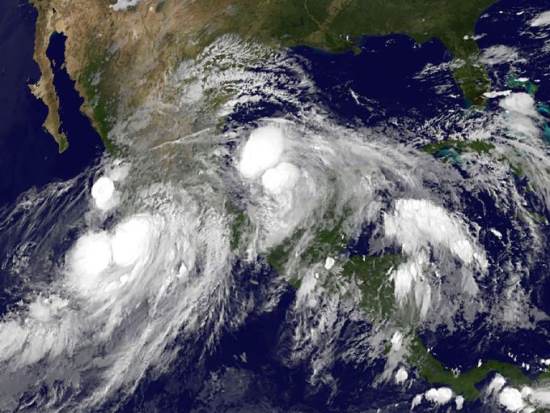 On September 15th Hurricane Ingrid with winds of 75-85mph drifted toward Taumalipas in northeast Mexico. Meanwhile. Tropical Storm Manuel with winds about 60mph made landfall near Manzanillo, Colima. Once over land, the storm quickly lost power; by that evening winds were down to 35mph and Manuel was downgraded to tropical depression, but heavy rainfall continued. The next morning on the 16th Manuel’s winds were down to 30mph and it was further downgraded to a “remnant” of a tropical storm. But later that day, the remnant of Manuel move back to the Pacific Ocean near Puerto Vallarta and began to regain its strength.

That same morning September 16th Ingrid, which had weaken to a tropical storm with winds of 65mph made landfall just east of Ciudad Victoria, Tamaulipas. By the next morning, the 17th, Ingrid’s winds were down to 25mph and it was downgraded to a “remnant” though heavy rainfall continued.

Later on the 17th, Manuel regained its status as a tropical depression (winds of 35mph). The next morning, the 18th, it regained tropical storm status and by that afternoon it became Hurricane Manuel with winds of 75mph. Early on the 19th it made landfall west of Culiacan, Sinaloa. Moving east over land Manuel quickly lost power and was down to a remnant by the morning of the 20th. However, the remnant of Manuel continued far north and east joining the remnant of Ingrid and bringing torrential rains and flooding to central Texas, including Austin.

While storms are classified by their wind speeds from tropical depressions to tropical storms and then to hurricanes with intensities one up to five; this classification does not capture the extent of damage that can be caused. The amount of rain combined with the terrain can be far more damaging than the wind speeds. Furthermore the storm surge associated with a storm’s low pressure and high tides can be far more devastating than the winds as we saw with Hurricane Rita in New Orleans and Hurricane Sandy in New York.

In the case of Manuel, the amount of rainfall was far more destructive than the winds. The rains of Manuel as a “tropical storm” off the coast of Guerrero did far more damage than Hurricane Manuel did later in the State of Sinaloa or Ingrid did in eastern Mexico. Manual caused a total of about 84 reported deaths. At least 72 people were reported dead in Guerrero and another 68 were reported missing in the town of La Pintada that was partially buried under a massive mudslide. In Acapulco about 18 died. Floods closed the exit highways and the airport, temporarily stranding 40,000 tourists. These photos from the Guardian and USAToday show the extent of flooding in Guerrero, especially around Acapulco.

In contrast fewer than a dozen people reportedly died in Sinaloa which was later directly hit by Hurricane Manual. While Ingrid had considerably stronger winds than Manuel, its death toll of only about 23 was spread across several states from Puebla just east of Mexico City up to Tamualipas on the Texas border. More than half the total, 12 died in Altotonga, Veracruz, when a mudslide smashed into a bus. Of course, deaths are not the only, nor the best, measure of a storm’s destructive impact. Other commonly used measures are the financial cost of the damage and the number of people who evacuated or become homeless. No matter what measure is used, hurricanes are one of the most destructive natural hazards.