The Primavera Forest (aka Bosque de la Primavera, Sierra de la Primavera) is a volcanic region located immediately west of Mexico’s second-largest city, Guadalajara. The Primavera Forest occupies an ancient volcanic caldera, where the last eruptions are thought to have been about 30,000 years ago. The Primavera is a wilderness area of pine and oak woodland, with hot-water rivers, nature-trails and thermal spas. The park, which is about 30 km (19 mi) across (see map), serves as the lungs of Guadalajara and is popular, especially on weekends, for activities such as picnics, birdwatching, hiking, climbing, mountain biking and motocross. 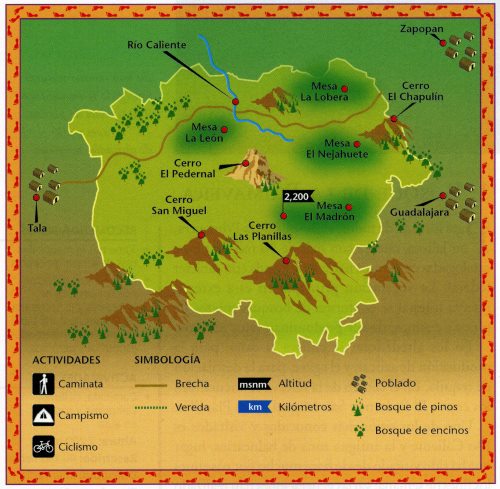 Basic map of the Primavera Forest. The distance between Tala and Guadalajara is about 35 km (22 miles). Credit: Semarnat, 2003

The main geographic and geological attractions of the Primavera Forest include:

The average elevation of the Primavera Forest is about 2200 m above sea level, rising to 2270 m (7447 ft) towards the eastern edge of the forest which overlooks the city of Guadalajara. The three main summits are El Pedernal, San Miguel and Las Planillas. There is easy access to the 30,000 ha of protected natural area from various points, including the town of Tala and from Highway 15 (the main Guadalajara-Tepic highway) which skirts the northern edge of the Primavera. Agriculture and settlement have made incursions into the edges of the park, with land cleared for subdivisions or for fields of sugarcane and agave (for tequila). A major wildfire raged through parts of the forest in 2012.

The park is home to about 1000 different plant species as well as 137 different birds and at least 106 terrestrial animals, including deer, puma, opossums (tlacuaches), armadillos and rabbits.

Thermal springs are common throughout the Volcanic Axis of Mexico, and the hot river and many hot springs in the Primavera Forest are a legacy of its volcanic history. Río Caliente, the main developed spa in the Primavera Forest, famous for several decades as one of the country’s top vegetarian and health spas, closed in 2011, following some years of uncertainty regarding its land tenure status and increasing security concerns because of its relatively remote location.

The hot springs in the park have been subject to numerous exploratory studies by the Federal Electricity Commission (CFE) which considers the park a potential source of geothermal power. The CFE drilled a dozen wells in the 1980s, finding that six of them offered sufficient flow for power production. The CFE believes the park could support at least three 25 megawatt geothermal plants. Drilling was suspended between 1989 and 1994 when the Jalisco state government ordered the CFE to carry out environmental restoration to areas damaged by drilling activities, and the plants have not yet been approved.

As veteran explorer-author John Pint points out in “A geopark in my back yard?”, the Primavera Forest is well known to geologists for its giant blocks of pumice, up to several meters across, which are among the largest found anywhere in the world. One of the best locations for seeing these is in the 50-meter-high walls of the Río Seco arroyo on the northern edge of the park, on the outskirts of the small community of Pinar de la Venta. The cliff face has a thick band of pumice overlying numerous thin layers of lake sediments. The pumice blocks are highly vesicular (full of holes) and therefore surprisingly light for their size.

The Primavera Forest is also well known to geologists (and archaeologists) because it has significant amounts of obsidian, a hard, glassy, usually black rock. Obsidian is easy to find (often in big chunks) in several parts of the park. The obsidian formed when blocks of hot lava, still molten, rained into the cold waters of a lake, cooling instantaneously. When fractured, pieces of obsidian acquire very, very sharp edges. Even today, some surgeons still prefer obsidian scalpel blades, recognizing that they are far sharper than those made from even the best steel.

Obsidian was in great demand in precolonial times for use as mirrors, arrowheads and knives, as well as jewelry:

“Among the people to prize obsidian were the residents of Iztépete (often spelt Ixtépete), “hill of obsidian or knife blades”, located just outside the eastern edge of La Primavera. This small, largely forgotten, and poorly-signed archaeological site in a southern suburb of Guadalajara is within a stone’s throw of the city’s periférico (ring-road).”

“Large, angular chunks of obsidian litter the slopes of Cerro Colli, the hill rising behind the 6-meter-high pyramid, which conceals at least five earlier pyramids, each superimposed over the one before. Ceramics found here suggest that occupation stretches back at least to the fifth century, but little is known about the people who built this site.”  [Quotes are from the recently published 4th edition of the author’s “Western Mexico, A Traveler’s Treasury”]

Obsidian is found throughout this region, and while usually black in color, it can also be found in a range of hues, including red and even rainbow patterns. Not far from the western edge of Primavera, at the foot of a steep-sided knoll called El Picacho is El Pedernal, reputed to be the largest obsidian deposit in the world, covering 4 square kilometers, from which an astonishing 40,000 cubic meters of rock have been extracted over the centuries. Sophisticated chemical techniques have shown that El Pedernal obsidian was widely used in Mesoamerica, finding its way as far north as California and as far south as Oaxaca!

The pre-Columbian obsidian jewelry from this region, consisting of very thin wafers of rock, is unique to this area, and clearly the work of highly skilled specialist craftsmen. One particularly fine example (now in the museum in Tala) is a necklace fashioned out of wafer-thin obsidian carvings of human figures, each pierced by a tiny hole. In the absence of metal tools, the patience and dexterity required to have made these is truly amazing.

The art of obsidian carving has not been lost. Skilled artisans in Navajas, another nearby village, continue to this day to chip and shape chunks of obsidian into spheres, chess boards and beautiful works of art, often representing animals.

In future posts we will consider the formation of the La Primavera Forest in more detail, and also look at the extent to which the pressures resulting from its proximity to the city of Guadalajara threaten the park’s long-term health.

John Pint is one of those spearheading the proposal of seeking UNESCO designation for La Primavera as a GeoPark.