The online Atlas of Economic Complexity is now interactive, allowing users to choose and combine a large number of variables related to imports, exports, date and country. In the webpage’s own words, it is “a powerful interactive tool that enables users to visualize a country’s total trade, track how these dynamics change over time and explore growth opportunities for more than a hundred countries worldwide.”

What is economic complexity?

A country with a high Economic Complexity has a wide range of complex knowledge capabilities related to productive enterprises. Its economy is likely to produce sophisticated products that require a very wide and diverse set of knowledge capabilities. For example, relatively few countries have the capabilities to produce highly complex chemicals or pharmaceuticals, since their production requires very specialized equipment and very precise measuring instruments. Equally, very few countries have nuclear power stations or space stations, since they lack the range of knowledge capabilities needed to build them. At the other end, a very large number of countries have far less complex economies that are capable of producing simple products (basic foods, mineral ores, lumber, garments, shoes, glass, kitchen utensils, furniture) but not products involving more complicated processes or technology

We first discussed the Atlas in 2012 in How “complex” is the Mexican economy?, when we noted that the Atlas ranked Mexico’s Economic Complexity Index (ECI) as #20 of the 128 countries studied. The interactive nature of the online Atlas has added the opportunity to explore many more trends in trade, generating a range of related, visually-appealing infographics.

In particular, choosing Mexico as the country, the Atlas can answer questions such as:

Playing with the variables and dates in the Atlas is a really interesting way to explore just how Mexico’s exports and imports have changed over the years. For example, compare these infographics for Mexico’s exports in 1964 and 2010 respectively: 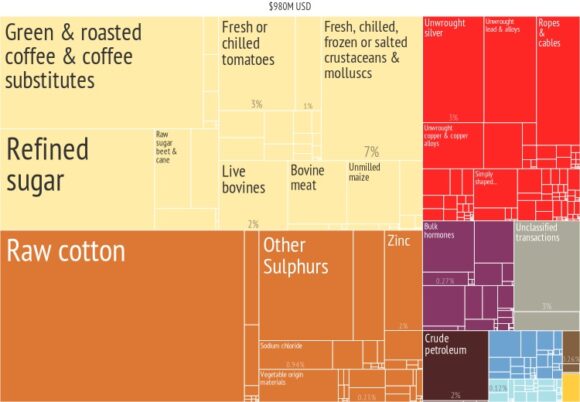 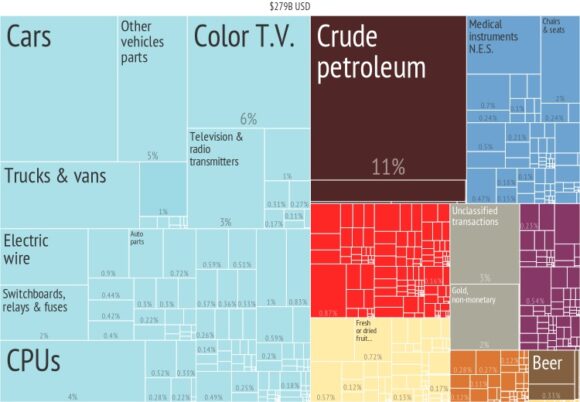 It is sometimes hard to imagine just how much Mexico has changed in the past fifty years! Overall, at rank #20, Mexico turns out to have an unusually high Economic Complexity Index given its income level. (All the other countries in the top 20 have significantly higher incomes than Mexico).

According to the Atlas, during the rest of this decade Mexico’s GDP should grow relatively rapidly, bringing its GDP rank more in line with its Economic Complexity Index. In general, analyses in the Atlas indicate that during the last few decades countries with higher than expected ECIs compared to their income levels experience more rapid economic growth.

Note, though, that while this relationship is empirically true, it does not explicitly include other factors thought to be important to economic growth such as governance and institutional quality, corruption, political stability, measures of human capital and competitiveness indicators.

One producers’ organization, Mexico’s National Confederation of Maize Growers (CNPAMM), argues that this reliance on imports has relegated the work done by its members to a relatively minor role in providing the nation with food. The growers claim that the price they receive for corn (post-NAFTA) has declined in the face of cheaper imports, jeopardizing their livelihoods. (For one view of the changes post-NAFTA, see NAFTA Truth and Consequences: Corn).

On the other hand, in the past few years, the costs of imported corn have risen sharply, meaning that consumers have to pay more for their tortillas. In order to preserve some stability, the Mexican government has bought corn futures which guarantee corn prices for a period of time.

How is it possible that the country that gave the world corn is now so dependent on imports of corn, almost all of which come from the USA? According to the CNPAMM, it is the result of speculation, market distortion and failures in Mexico’s economic policy. Héctor Carlos Salazar, the president of CNPAMM, called on maize growers to demand better prices, a reduction in imports, and some guarantees from the politicians fighting this year’s federal elections that they will take steps to ensure Mexico’s self-sufficiency in foodstuffs.

Salazar has been quoted in the press as offering some interesting statistics for the impacts of every additional ton of corn that Mexico imports from abroad. He claims that each ton imported reduces agricultural employment by 4.54 man-hours. It also reduces other inputs: diesel by 6 liters, fertilizers by about 100 kg, insecticides by 1 liter, pesticides by 3 liters and improved seeds by about 4 kg.

The bottom line is that it is not just the food security, particularly of Mexico’s poorest, that is threatened by rising corn imports, it is also Mexico’s economy.

Mexico may have major reserves of petroleum but it lacks the necessary refining capacity to supply the domestic market with all the refined products such as vehicle fuels that its industrial, commercial and residential sectors demand.

As a result, Mexico has to import refined petroleum products, mainly from the USA. The high costs of these imports is a constant point of discussion in Mexico. If the country developed sufficient refining capacity, it could spend every dollar that currently goes on petro-based imports on something else, such as social services or infrastructure improvements. 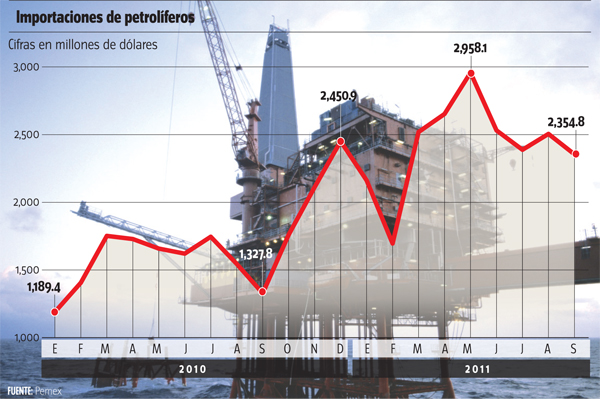 Pemex imports, by month. Figures in millions of US dollars. Credit: milenio.com

A small fortune is being spent each month on petroleum-related imports (see graph). Over the past year, the cost of imports has risen 12.3%. This is almost entirely due to higher oil prices on international markets; the volume of imports has increased only 1% over the period.

Imports of refined petroleum products will not end any time soon. Mexico does plan to build new refineries and expand its refining capacity, but they will take years to complete. Earlier this year, it was reported that Pemex engineers were adding the final touches to the blueprints for a new refinery in Tula (Hidalgo). Work began with the re-routing of existing irrigation channels and high tension power lines to take them well away from the site. It remains unclear, though, just how long it will take for this project to be completed.

In recent years, Mexico has faced increased competition in world markets from China and other Asian countries. Mexico’s contribution to US imports peaked at about 12% in 2003 but has since fallen to around 10%. Chinese imports to the USA overtook Mexican imports in 2003 and now account for 15% of the total market.

According to Mexico’s central bank, Mexico’s lost market share between 2001 and 2005 was worth $27 billion, equivalent to 15% of all non-petroleum exports. Some multinationals closed their assembly facilities in Mexico and moved them to China.

What are China’s advantages?

The two most important ones are wage rates and the much larger local market. The average hourly wage for manufacturing in China is $0.66, compared to $2.13 in Mexico. China also offers more incentives for foreign investment. The companies that have moved are manufacturers of textiles, electronic items and auto-parts; these footloose industries do not have complex and expensive plants (unlike steelworks and chemical plants for example) and can therefore relocate relatively easily. While most have relocated in China, some have preferred South Korea or India.

What are Mexico’s comparative advantages over China?

Mexico’s major advantage is proximity to the US market. Shipping a standard 40-foot container from Mexico to the USA costs less than half the cost from China. Mexico also has a more educated workforce, with about one-quarter of the population having completed secondary education, compared to less than 17% in China. The productivity of Mexico’s workforce is slightly higher than in China, and the country also retains a slight edge over China in terms of its legal system. In an effort to stem the outflow of jobs, the Mexican government has opened several high-tech industrial parks, such as Silicon Border in Mexicali, and these appear to be having some success.

[Excerpt from chapter 20 of Geo-Mexico: the geography and dynamics of modern Mexico.]