Diana Kennedy is the world’s foremost authority on regional Mexican cuisines. Born in the UK, she moved to Mexico in 1957 with her husband, Paul Kennedy, a New York Times correspondent. Over the next half a century, Kennedy traveled the length and breadth of Mexico, collecting stories, cooking techniques and recipes, and writing about regional cuisines from all over the country. 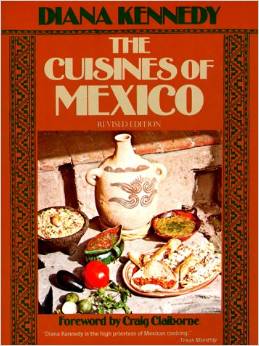 Her first cookbook The Cuisines of Mexico was published in 1972 and quickly became a classic. She has written several other books about Mexican cuisine, including

Now in her nineties, Kennedy continues to live in an eco-friendly house in s small village near the city of Zitácuaro in the western Mexico state of Michoacán. The Mexican government awarded her the Aztec Eagle, Mexico’s highest award for non-Mexicans, for her truly outstanding contribution to the country.

In this recent BBC radio podcast, Diana Kennedy is interviewed about her lifetime’s work, including the thousands of hours spent driving along dusty dirt tracks in her pick up truck in search of yet another unrecorded gem of Mexican cuisine.

Her travels often took her to indigenous villages, way off the beaten track, where she would study how and what the local people cooked, discovering along the way, all kinds of things never previously written about.

The initial leads for the next trip often came from the maids of friends in Mexico City, maids who were prepared to share their family recipe secrets with her.

Kennedy documented varieties of corn and beans that are rapidly disappearing, as are the small family farms where they were grown. In most locations, she would start by exploring the local market. Marveling over the incredible fresh produce she encountered wherever she traveled, she recorded every detail; sadly, some of these markets have long since disappeared.

The “Mexican miracle” of the 1960s and 1970s, with its growing economic prosperity brought a tide of imported foods into Mexico. These reached deep into the countryside. In many places, traditional foods were forgotten, replaced by imported items such as wheat bread and pork chops.

Dietary changes have continued to plague Mexico, leading to a dramatic increase in obesity. Note, though, that despite the claims made on this BBC program, Mexico does not yet lead the world in obesity – though it is the fourth most obese country in the world (excluding small island states). Clearly, BBC researchers should read Geo-Mexico more often.

Kennedy’s 1972 book, The Cuisines of Mexico was a ground-breaking look at the regional world of food in Mexico. UNAM, Mexico’s National University, is keeping Kennedy’s work alive by making digital copies of all her notebooks, some of which date back to the 1950s.

For more about Mexican cuisine, visit the amazing award-winning blog Mexico Cooks! and also browse the huge selection of recipes, articles and tips about all aspects of Mexican food and cooking in the “Cuisine” section of MexConnect. ¡Buen provecho! 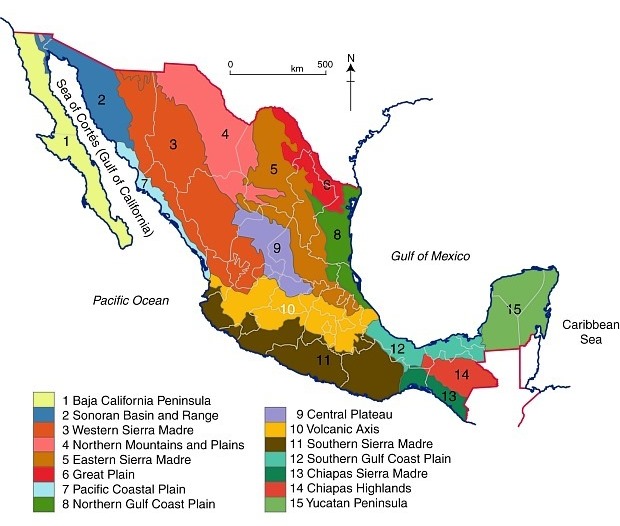 A taco is a corn or wheat tortilla folded or rolled around other edible ingredients, and designed to be eaten by hand – the indigenous Mexican equivalent of a sandwich. Tacos are extremely versatile and often accompanied by garnishes such as tomatoes, onions, lettuce, radishes, and avocado or guacamole, topped with salsa and cilantro.

Who would have thought that the humble taco was worth its own encyclopaedia? This particular encyclopaedia includes a fascinating graphic – a map (see graphic) summarizing the different regional varieties of taco commonly found in different parts of the country.

The accompanying terminology used to describe all these tacos is mind-blowing, but a small sampling will give you the idea: 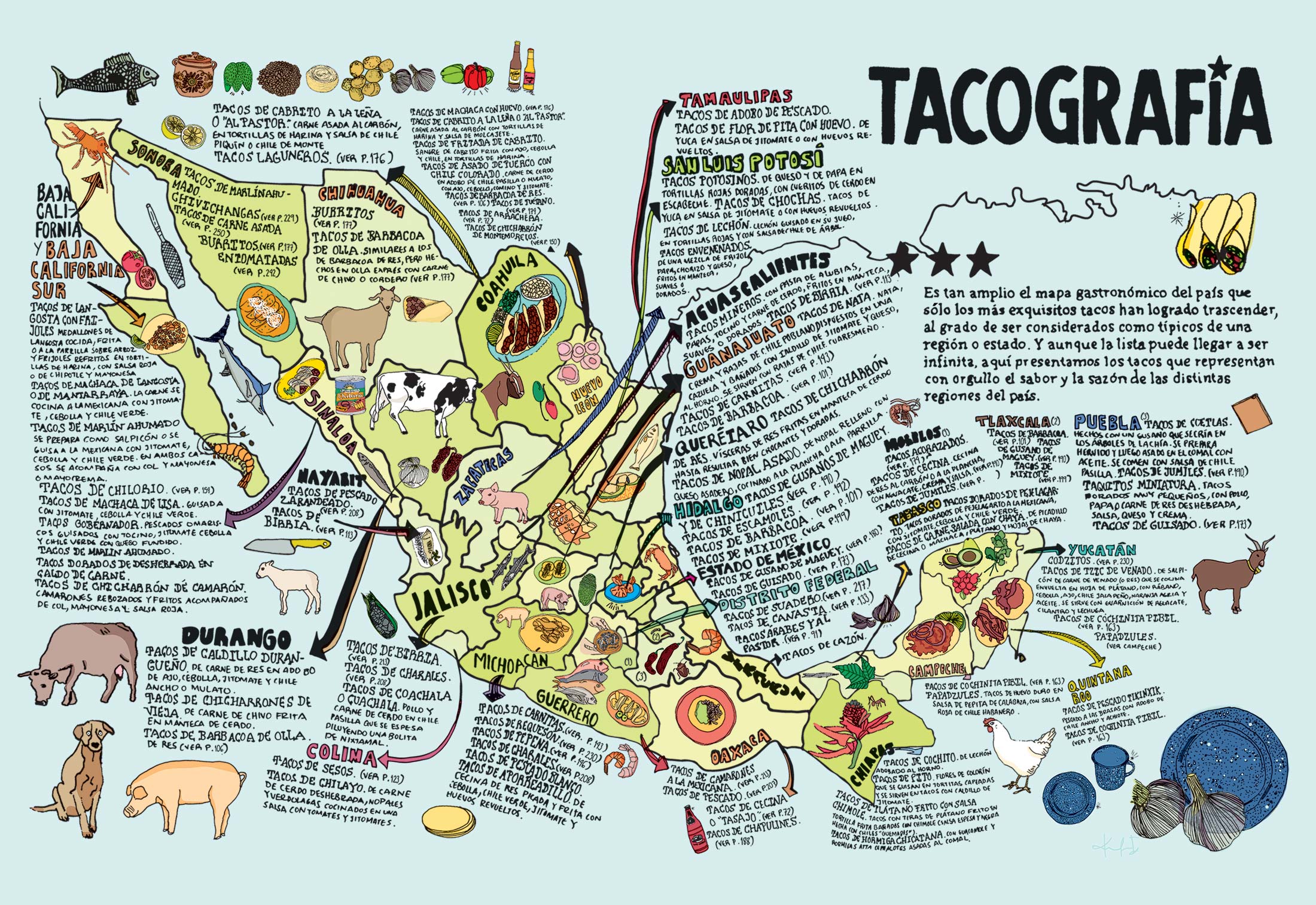 The map is by no means an exhaustive list, but does include examples of taco specialties for every state.

The two states occupying the Baja California Peninsula both have seafood-based tacos:

The tacos popular in some states reveal less about their ingredients:

For some unusual ingredients, try:

Feeling daring? Try the tacos envenenados in Zacatecas. The literal meaning is “poisoned tacos”, but they are apparently named so as not to reveal all their ingredients!

Tacos have become incredibly popular. While they predate the Spanish conquest, they are now well on their way to conquering large swathes of North America and Europe.

A recent snapshot of the industrial real estate market in the last quarter of 2013 compares progress in three industrial regions in Mexico: Northern Mexico, Central Mexico and the Bajío Region. The snapshot comes from the report ‘Industrial Markets in México (Q4 2013)‘ by Jones Lang LaSalle, a global real estate services firm specializing in commercial property management, leasing, and investment management. 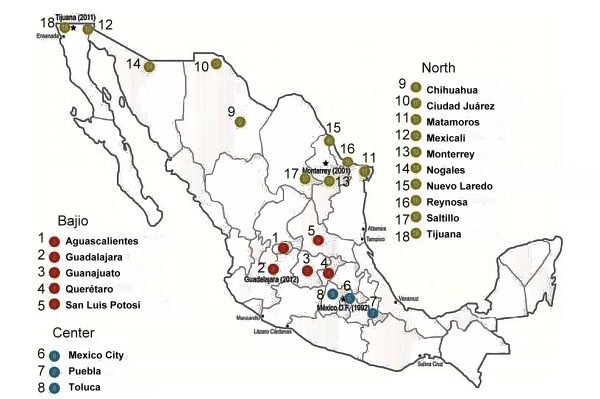 The pattern of commercial and industrial real estate in Mexico

The five main cities of the Bajío Region (Aguascalientes, Guadalajara, Guanajuato, Querétaro and San Luis Potosí) are booming in terms of commercial and industrial real estate. In the final quarter of 2013, the region added about 550,000 m2 of commercial and industrial space. This was more than double the additional space added in Central Mexico (Mexico City, Toluca and Puebla) and close to the total amount (614,000 m2) spread between 10 cities in northern Mexico (see map).

In the North Region, “Tijuana has been occupying vacant space… and Ciudad Juárez is on its way to recovering from low rents and high vacancy”, while the automotive sector is driving growth in Saltillo-Ramos Arizpe.

The Central Region is helped “by third party logistics companies that grow their business and footprint in Mexico City’s surroundings”, while “Toluca and Puebla grew mainly because of the car manufacturing demand for space.” Commercial rents rose in Mexico City and in Toluca. “Big Box requirements keep driving this market. Development has been very active at the Tepotzotlán toll booth surroundings.”

The Bajío Region has consolidated “with new industrial parks related not only to the new car manufacturing plants, but also for new investments related to aerospace, food and personal consumer” products.