How does Mexico compare with the world’s most populous countries? Available information suggests that in 1500, before the Spaniards arrived, the population of the area that is now Mexico was roughly 15 to 20 million (McCaa 1997). At that time Mexico may have been the third most populous country behind only China and India. However, by 1600 the population had crashed to about 1.6 million, one of the most dramatic population collapses in human history. Mexico did not regain its pre-Columbian population level until about 1900. But the population declined by about 6% during the Mexican Revolution, 1910-1920. 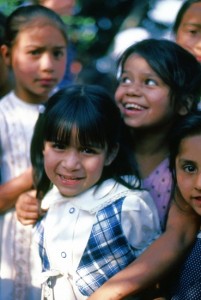 A recently published UN study, World Population Prospects, The 2012 Revision, enables us to compare Mexico’s population with that of other countries for 1950, 2013, 2050 and 2100. Slow but steady growth brought Mexico’s population up to 28 million by 1950, ranking Mexico 16th just ahead of Spain and right behind the Ukraine. Very rapid growth peaking in the 1970s increased Mexico’s population to about 120 million by 2013. [The UN report quotes Mexico’s 2013 population as 122 million, whereas Mexico’s CONAPO (National Population Commission) estimates the current population is 118.4 million, the difference perhaps due to differing assumptions about international migration.]

By 2020, Mexico will pass Japan to become 10th, the highest it will ever rank except for during the pre-Columbian era.

The UN study forecasts that the Mexican population will grow to 156 million by 2050. This is considerably higher that the Mexico’s National Population Commission (CONAPO) forecast, which uses higher rates of out-migration. In 2050 Mexico will be back in 11th place, having jumped ahead of Russia, but having been passed by Ethiopia and the Philippines. According to the UN study by 2050 India will have passed China, and Nigeria will have replaced the USA as the 3rd most populous.

By 2100 Mexico’s population will be down to 140 million, putting it in 16th place behind Nigeria and five other very rapidly growing African countries: Tanzania, Congo, Uganda, Niger and Kenya. Interestingly, between 2050 and 2100 all of the 31 largest countries are expected to lose population except the USA, the Philippines, and 12 African countries. The world’s total population will have essentially leveled off by 2100 at about 10.9 billion with African countries continuing to grow while European and Asian countries experience population declines. Of course many unexpected demographic changes may occur between now and 2100.

According to the study, Mexico’s life expectancy at birth will be 90.0 years in 2100, above the USA’s level of 88.8 years, but behind Canada at 91.2 years. Mexico’s total fertility rate is forecast by the UN at 1.99 children per women in 2100 which is considerably higher than rates forecast by Mexico’s CONAPO and other demographers.

How long do Mexicans live? The 20th century brought dramatic increases in longevity. From under 30 years at the beginning of the century it rose to 38 by 1930. From there it went up to 50 by 1950 and reached 62 by 1970. By 2000 it was 72, almost double the 1930 value. Women live longer than men. Life expectancy for Mexican women is about 78; that for men is roughly 73 years. In the future Mexican longevity is expected to increase at about 2.5 years per decade. This is not as rapid as in the past but still significant. 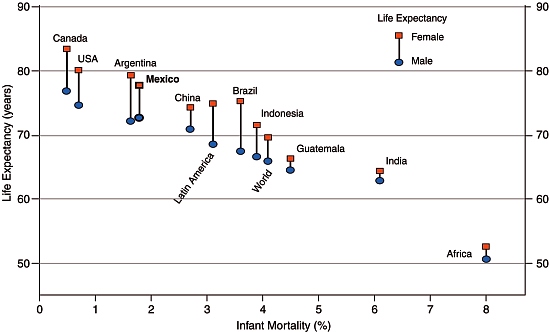 Infant mortality and life expectancy for a range of countries and regions, 2010. Fig 28.2 of Geo-Mexico; all rights reserved.

It is not easy to find an accurate and reliable indicator of health. One common indicator is infant mortality, the percentage of children who die before their first birthday. This usually provides a reasonable measure of the general quality of health in a society. Mexico has made impressive progress; its infant mortality rate dropped from 7.5% in 1970 to 1.7% by 2005. More improvements are expected in the years ahead.

Mexicans clearly are living longer and healthier lives than they did in past decades. How does Mexico compare to other major countries? Though Mexico trails Canada, the USA and Argentina (see graph), it is slightly ahead of Brazil, China and the weighted average for Latin America. Mexico is significantly ahead of Indonesia, the world average and its southern neighbor Guatemala.

Gapminder is a wonderful resource for an overview of all manner of things geographic. The link below will take a few minutes to load, but should then show how Mexico’s GDP/person (on a purchasing power parity basis) and life expectancy have changed since 1800. The size of the yellow circle for each year is proportional to Mexico’s total population, with a scale that can be user-modified at the bottom right of the graph. Hover your mouse over a circle for the year to be identified.

The early figures for GDP/person are unlikely to be very reliable, but once we reach the 20th century, the figures are based on better assumptions and data. After falls in GDP/person and life expectancy in the early stages of the Mexican Revolution (which began in 1910), both variables increased steadily until about 1926. While life expectancy has continued to rise since then, with the occasional dip, GDP/person shows some obvious “blips” such as the early 1950s when it fell quite sharply.

It is interesting to play with the chart and look at how GDP/person and life expectancy have changed for other countries.

Life expectancy in most European countries has increased steadily over the past couple hundred years at a rate of about 2.5 years per decade (25 years per century). In the developing world, the increase has been higher, between 3 and 5 years per decade.

If Mexico continues to increase its life expectancy by 2.5 years a decade, today’s average Mexican newborn will have excellent odds of living to be 100 or more. Of course, to reach age 100, these Mexicans will have to avoid obesity and diabetes. Currently, Mexico ranks second to the US in rate of obesity among major countries and is first in rate of diabetes.

Actually, the common definition of life expectancy at birth is rather conservative. It assumes that as babies born in 2010 age, they will die at the same rate as all current cohort groups. For example when babies born in 2010 reach age 80 in 2090, they will die at the same rate as current 80-year-olds. Thus there is no allowance for advances in health care such as cures for cancer, Alzheimer’s, etc. With the current rate of genetic advances, improved cures and treatments for today’s fatal diseases are almost assured. Therefore, we expect the death rate of 80-year-olds in 2090 to be far less than the death rate for 80-year-olds in 2010.

Life expectancy at birth is discussed in chapter 9 of Geo-Mexico: the geography and dynamics of modern Mexico.