Mexichem is a Mexican chemical and petrochemicals company (2014 total revenues: US$ 5.6 billion), with headquarters in Tlalnepantla, in Greater Mexico City. Mexichem is a world leader in making and marketing plastic pipes and other products required in the infrastructure, housing, telecommunications, drinking and potable water sectors.

It employs 19,200 workers and has 120 manufacturing operations in more than 30 countries, with a sales presence in 90 countries. 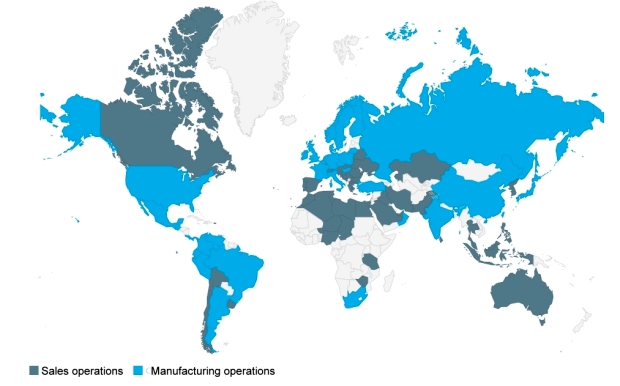 The company’s origins date back to 1953 when a group of Mexican and English investors founded Cables Mexicanos S.A. to make high carbon steel wire ropes. Several changes of name and owners later, it emerged in 2005 as Mexichem. Mexichem has grown rapidly since then, largely due to an aggressive series of acquisitions.

The list goes on in succeeding years, with a succession of acquisitions of companies making PVC pipes, connections, polymers, resins, and fluorochemical competitors to become a world leader in the fluorine chemical segment, particularly in the production of refrigerant and medical gases. 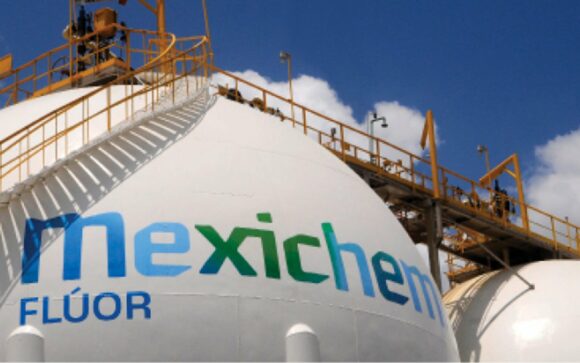 A note on Mexico’s importance for fluorite

Mexichem sits on the world’s largest high-grade fluorite deposits, in its mine in San Luis Potosí. It produced 529,464 metric tons of fluorite from this mine in the first six months of 2015, 96% of the national total.

Mexico’s seven leading food and beverage multinationals have invested a total of 7.42 billion dollars overseas in the past five years. The investments include acquisitions of other firms, building new plants and enlarging or remodeling existing plants.

The seven firms are:

In terms of the number of countries where they have a presence, the two most globalized food and beverage firms in Mexico are Grupo Bimbo and Gruma, which are in 22 and 18 countries respectively (see map). Both firms are now quite dependent on foreign earnings. About 61% of Bimbo’s revenues, and almost 70% of Gruma’s revenues, originate from outside Mexico. Both firms have the longest reach of any of the food and beverage multinationals: Bimbo as far as China, and Gruma in Australia.

In this post, we take a quick look at each of these seven firms and their recent activity abroad:

Femsa, based in Monterrey, is the world’s largest bottler of Coca-Cola products, with 45 plants in Latin America, including Colombia, Brazil and Venezuela, as well as 19 plants in the Philippines. It spent 1.855 billion dollars to buy Brazilian firm Spaipa, and a further 258 million dollars on building a new plant there (its tenth plant in Brazil), as well as 688.5 million dollars for 51% of the Coca-Cola Company in the Philippines. Femas also operates the OXXO chain of convenience stores, the largest such chain in Latin America.

Grupo Bimbo is the world’s largest bread maker and the biggest bread seller in the USA. It is the world’s 4th largest food company behind only Nestle, Kraft, and Unilever. Bimbo has 85 plants in the USA and Canada, 39 in Mexico, 32 elsewhere in Latin America, 10 in Europa and one in Asia. It has expanded primarily via acquisitions. It bought Canada Bread in 2014 for 1.66 billion dollars. In 2011, U.S. agencies authorized its purchase of Sara Lee for 709 million dollars. It also bought Bimbo Iberia (Spain) for 160 million dollars in 2011. It is now awaiting approval from Spanish regulatory authorities to complete its purchase of Panrico for 210 million dollars.

Gruma (main brands Maseca and Mission) is the world’s largest producer of corn flour and tortillas. It has 79 production plants worldwide and operates in North America, Europe, Asia and Oceanía. Gruma recently bought Azteca Foods Europe (Spain) for 48 million dollars. In 2014, it bought Mexifoods (Spain) for 15 million dollars. It also owns Albuquerque Tortilla Company. Gruma has also invested in new factories, including a 50-million-dollar plant in California, opened in 2010, as well as a new factory in Russia costing a similar amount.

Arca Continental, the second largest Coca-Cola bottler in Latin America, has 35 plants in the region. It purchased a milk products firm, Holding Tonicorp (Ecuador), in 2014 for 400 million dollars, and spent around 330 million dollars in 2012 to acquire two snack food firms: Wise Foods (USA) and Inalecsa (Ecuador).

Grupo Herdez has 13 plants in Mexico, one in the USA and one in Chile. It recently bought Helados Nestlé in Mexico.

What these firms have in common is that they specialize in making products that are relatively easy to adapt to local tastes (glocalization). They have also started their expansions outside Mexico by focusing initially on markets with familiar languages and culture before venturing further afield.

Every so often, a news article comes along which rattles our perceptions, causes us to think, and begs us to discuss big issues. This is one of those times.

Los Angeles Times reporter Richard Marosi and photojournalist Don Bartletti traveled across nine Mexican states, observing conditions and interviewing workers at some of the mega-farms that have powered the country’s agricultural export boom.

The resulting article, the first of a four-part series, was published yesterday in the Los Angeles Times, and offers lots of potential for serious discussions in geography classes around the world about agribusiness practices, supply chains, the persistence of inequalities, and a host of other issues. The article is accompanied by some great photographs and short, informative videos. 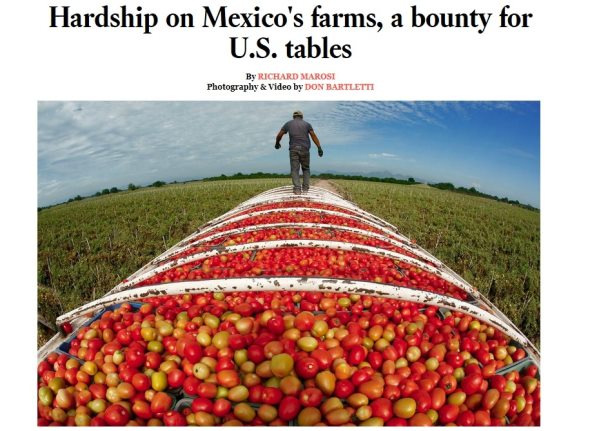 In “Hardship on Mexico’s farms, a bounty for U.S. tables“, Marosi and Bartletti find that thousands of laborers at Mexico’s mega-farms endure harsh conditions and exploitation while supplying produce for American consumers.

This is a must-read series for anyone interested in the Geography of Mexico, and we can’t wait to see the next three parts of this series.

Mabe is one of Mexico’s largest multinational companies (2013 sales: $3.3 billion) with a total workforce of 21,000. The company designs, produces, and distributes domestic appliances (stoves, refrigerators, etc) to more than 70 countries. 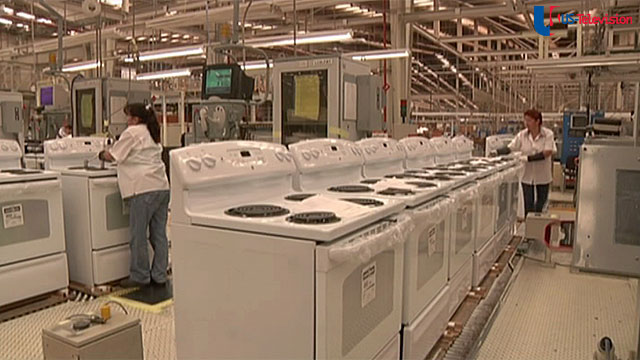 The company was founded in 1946, in Mexico City, by two Spanish immigrants: Egon Mabardi and Francisco Berrondo. It started by making kitchen furniture but quickly added gas ranges and refrigerators. By 1960, Mabe had already become Mexico’s single largest exporter of home appliances.

It continued to expand via an aggressive series of acquisitions, including the purchase of companies in Venezuela, Ecuador, Colombia, Brazil, Peru, Argentina and Canada.

To boost its presence in the USA and Canada, in 1986 Mabe created a joint venture with General Electric to produce appliances for the US market. 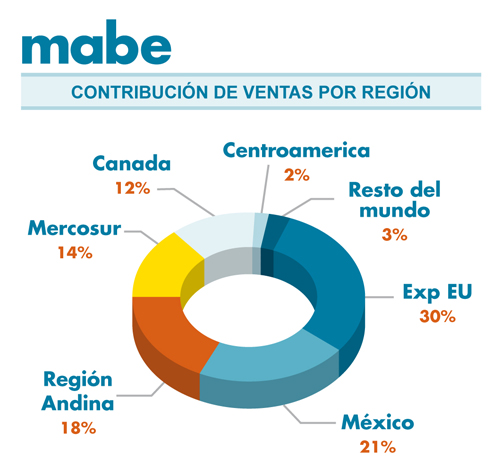 GE held a 48% minority stake in the new venture and hoped to gain access to Mexico’s low cost labor pool, while Mabe was able to use GE’s existing distribution network to gain wider access to markets throughout the USA. Within a decade, two out of every three gas ranges and refrigerators imported into the USA were designed and manufactured by Mabe in Mexico. Almost all (95%) of the ranges and refrigerators sold as General Electric brands were designed in Mabe’s San Luis Potosi plant, the biggest kitchens plant in the world.

The implementation of NAFTA in 1994 led to further opportunities for Mabe. Since NAFTA, Mexico has become the leading supplier of household appliances, such as stoves, refrigerators, dryers and washing machines to the USA and Canada. In 2005, Mabe continued its expansion by acquiring Canadian firm Camco.

NAFTA also led to the firms competitors, including Whirlpool, Electrolux, Samsung and LG all establishing factories in Mexico.

The company, which is still headquartered in Mexico City, is a major purchaser of steel on the North American market, consuming steel worth around $500,000 each year. Its products include microwaves, washing machines and dryers, wine storage systems, air conditioning, motor-compressors, plastic injection and die-casting machinery.

Mabe’s business practices incorporate a degree of “glocalization” in which the company’s designs are modified to be specific to particular regions, based on the consumer preferences and tastes in each country or region.

In 2014, Mabe announced that it was spending $80 million to repatriate its only Canadian plant from Montreal to Ramos Arizpe, Coahuila. The plant makes washing machines, driers and dishwashers. Together with Mabe’s existing plant in Ramos Arizpe, the two plants have the capacity to turn out about one million washing machines annually.

The Mexican business press consistently describes Mexico’s movie-going industry as being divided between two major players: Cinépolis, the fourth largest cinema chain in the world, and Cinemex, now the world’s sixth largest cinema company. It should be noted that their world rankings lack independent verification.

Cinépolis (“City of Cinema”) has 2456 screens in Mexico, giving it a 48% share of the domestic market. The chain consists of 205 theaters in 65 cities in Mexico, and more than 230 movie theaters and 3,000 screens worldwide, with a presence in Mexico, Guatemala, El Salvador, Costa Rica, Panama, Colombia, Brazil, Peru, India and the USA. It is Latin America’s largest movie theater chain.

The company began in 1947 in Morelia, Michoacán, as “Cine Morelos”. Rebranded several times, the company began expansion by opening theaters in nearby Salamanca, Acámbaro and Guanajuato, before entering the Mexico City market in the early 1970s. The brandname Cinépolis was first used in the mid 1990s, spawning the up-market Cinépolis VIP brand (luxury cinema with reclinable seats and service), in 1999.

Cinépolis extended its operations outside Mexico, first to capital cities in several Central American countries, including Guatemala, El Salvador, Costa Rica and Panama, and is now expanding into South America.

Cinepolis has also entered the lucrative Indian market, with mid-term plans to operate 500 screens in that country.

Cinemex, after its recent acquisition of smaller competitor Cinemark, has a 42% share of the domestic market.

Cinemex has a total of 2,359 screens in 264 locations across Mexico, an astonishing increase from the 44 locations it had in 2007, and now serves 78 million moviegoers a year.

Cinemex started with a college business plan focused on the provision of larger movie theaters. The first Cinemex theaters were opened in Mexico City in 1995. Within a few years, the chain had added cineplexes in Guadalajara, Monterrey, Toluca, Cuernavaca and Puebla. In 2013, it opened Mexico’s X4D theater, in Santa Fe, Mexico City.

KidZania is one of Mexico’s more unusual multinational corporations. It is a Mexican-owned chain of family entertainment centers, aimed at children aged 4 to 14. Each KidZania location is a child-sized replica of a real city, complete with buildings, paved streets, shops, vehicles and pedestrians. All buildings are scaled to be two-thirds their real-life size.

Children enter the city (usually via an airport-like setting) and then engage in role-play jobs in such branded activities as bottling Coca-Cola, serving at a McDonald’s restaurant or working in a Crest-sponsored dentist’s office. Others undertake the roles of firemen, doctors, police officers, journalists and shopkeepers, etc. “Workers” earn kidZos (local currency) to spend on entertainment, at the gift shop, or for premium KidZania activities. Each KidZania offers about 100 role-playing activities in 60 or so distinct establishments.

Alternatively, the 5-minute video below, from PBS’s American Milestones, describes how KidZania works, with particular emphasis on its claimed educational value:

The Mexican entrepreneur behind KidZania is CEO Xavier López Ancona. The first KidZania (later renamed La Ciudad de los Niños – The City of the Children) opened in September 1999 in Santa Fe Shopping Mall in Mexico City. Two more locations have since opened in Mexico: Monterrey, in northern Mexico, and Cuiculco, in the southern part of the Federal District.

The first KidZania outside Mexico opened as a franchise in Tokyo, Japan, in 2006. Since then KidZania has opened centers in:

Each park represents an initial investment of between 20 and 30 million dollars. Sponsors of KidZania activities vary by location and include (or have included) American Airlines, Coca Cola, Domino’s Pizza, Kellogg’s, Walmart, Danone, Mitsubishi, Honda, HSBC, Johnson & Johnson, Nestlé and Sony.

KidZania has won several major awards, including one as the World’s Top Family Entertainment Center by IAAPA (International Association of Amusement Parks and Attractions).